This past weekend ushered in the first cool weather of the approaching Fall season. The temperatures brought 75 degree days and 55 degree nights, which means that Autumn is definitely on its way. How exciting! Ms. Jeannie just loves this time of year between September and Christmas.

In an effort, not to rush the season, nor lose sight of any end of summer magic, Ms. Jeannie has been compiling a little nature journal for you, of all the creatures she’s encountered in these past few weeks. They have all made her summer so memorable!

It’s precarious business – getting all the seeds while still keeping your balance! 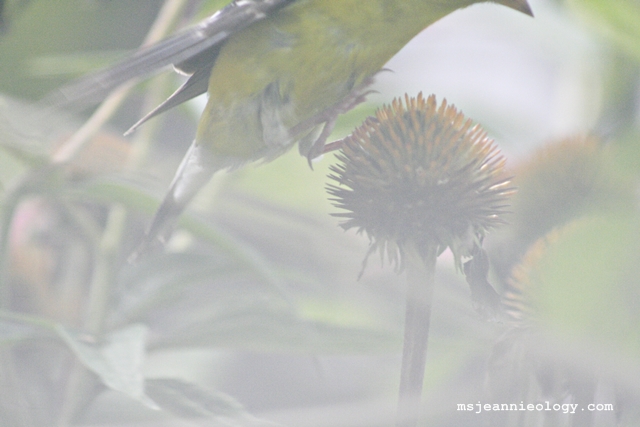 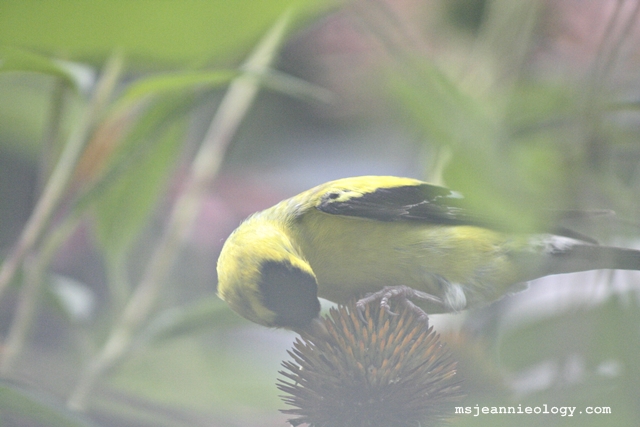 Boy-O is still looking for just the right nanny job.  This is still his favorite way to spend the day… 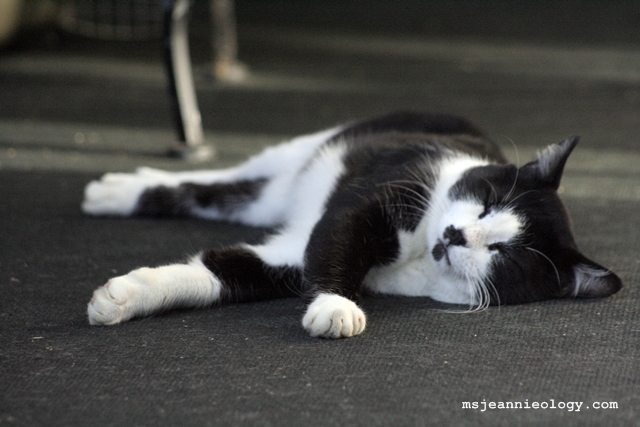 Tomorrow morning he goes in for a little “procedure” so he doesn’t populate the world with his own little nursery full of kittens.  As cute as those little legacies would have been, Ms. Jeannie explained to him that all of tomorrow’s events were really for the best.  He seemed pretty thoughtful about the whole thing during the conversation…

And then went right back to napping. “Piece of cake, Ms. Jeannie,” he meowed as he closed his eyes.

The little fig that Boy-O was looking after, unfortunately has not faired so well. It got caught up in a dramatic bird rescue (see hummer story below), which cost it it’s two little leaves. So we are back again, watering and waiting!

A hummingbird got caught in a spider web inside Ms. Jeannie’s screened in porch last week. Luckily, with the help of a step ladder and an umbrella he was freed before he really started to panic.  This incident really caught Ms. Jeannie off-guard – imagine how fragile a creature these hummers really are, and how strong spider webs are. This was just a regular web – nothing gigantic about it.  And webs are everywhere in nature. Could they really be such a peril to light little birds?

After some research, Ms. Jeannie learned that hummingbirds actually use cobwebs as a binder when making their nests, so eventually this little bird would most likely have worked himself free. But Ms. Jeannie was thankful anyway for Mr. Jeannie’s quick abilities in rescuing this little flyer… 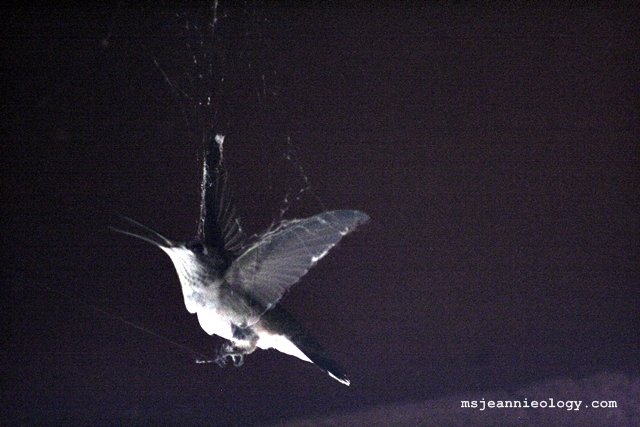 Billy Bob and Betty Boop have moved onto greener pastures. Apparently, Ms. Jeannie’s neighborhood didn’t really take too well to all of Billy Bob’s antics. He was constantly getting his head stuck in the fence, head butting just about everything, and  climbing all over the feed bucket at dinner time.  Ms. Jeannie thought these were supposed to be the fun things about having goats – their comical personalities and theatrical displays – but Ms. Jeannie’s neighbor was looking for less dramatics.

The day before they left for their new home, Ms. Jeannie filled them full of Saltine crackers – their most favorite snack. 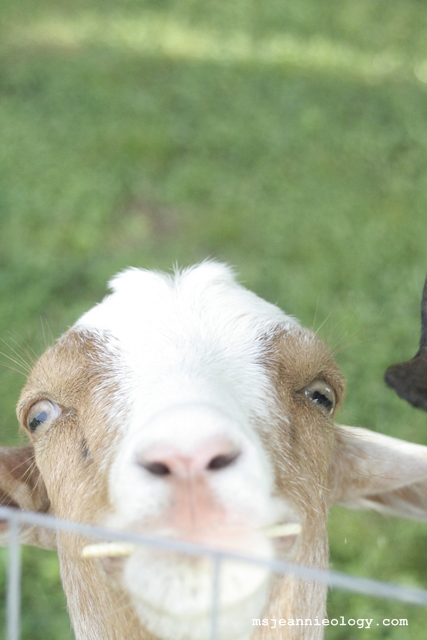 Billy Bob most appreciated it!

Due to all of our rain this summer, giant mushrooms are growing out of the trees down by the creek, which really has turned it into a magical forest. Ms. Jeannie is half expecting to see little gnomes or fairies pop out from behind those umbrellas!

They really are quite pretty when you look at them up close!

Right on schedule and just in time for fall, a new zig-zag spider, also  has built a web in a bush along the driveway. 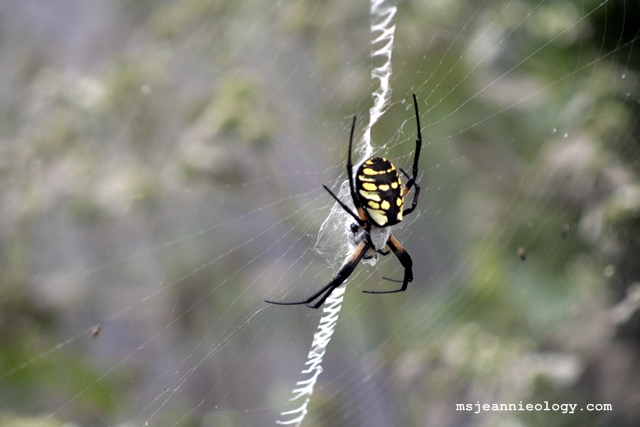 She’s about as big as an egg from leg to leg. Hopefully those hummers will stay clear of her area!

The resident red-tailed hawks have been on the hunt a lot lately.

One of them landed in the yard just as Ms. Jeannie was pulling in the driveway. Oh how she wished she had her camera with her on that day!  The hawk was about 2′ tall and just stood in the yard for a few minutes watching Ms. Jeannie watch him. It was a marvelous moment.

A blue tailed lizard, also known as a skink, emerges every evening now from its home underneath the porch steps and hangs out on the brick window ledge for a few hours.

If you’ve never seen of these guys before – they are really colorful. Their tails are a bright, bright blue and their bodies are black with yellow stripes. Interesting enough – if under attack from a predator, they can voluntarily pop-off their own tails, which will still wiggle about and deter whatever it was that was chasing them so that they can get away and hide. Eventually their tales will grow back – although their new tails will no longer be blue but instead match the color of their body.  The ones with blue tails are the babies of the bunch.

These little guys have been jumping around the garden for weeks now. They are also the dinnertime band when Mr. & Mrs. Jeannie eat outside on the patio. In this picture, they are rehearsing in Ms. Jeannie’s wax bean garden.  It’s good to know Ms. Jeannie’s twig supports are coming in handy for other activities too!

The scuppernong grapes are just starting to ripen on the vines. A few more days of warm sunshine and Ms. Jeannie will be inundated! 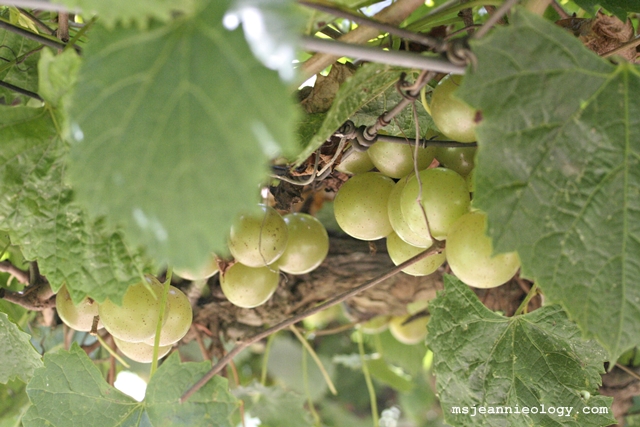 Which is exciting, because it turned out to be a dud year for the figs.  With all the rain and humidity, 90% of the figs just molded in all the moisture.  Most of them wound up looking like this…

Which of course was a little disappointing because Mr. Jeannie really hoped to perfect his fig barbeque sauce this year. But Ms. Jeannie’s holding out hope – there is a second batch of figs which, now that our sunshine to rainfall ratio has balanced out, might just turn out a good batch of figs yet. Here’s the ones that are still growing…

Of course, the construction site hasn’t been affected by the weather whatsoever. Those bald-faced hornets keep going and going and going.  Now their nest has taken on the look of a pig snout when viewed from below and a horn of plenty (no pun intended!) when viewed from the side. Maybe they are getting into the Thanksgiving mood:) 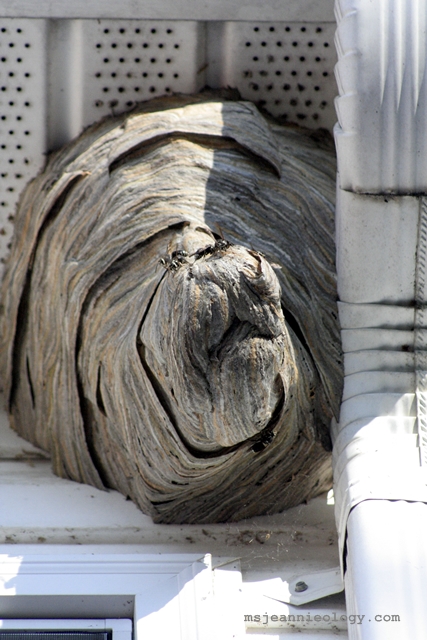 As you can tell in this picture below – they have completely sandwiched themselves against the gutter now. It will be interesting to see in which direction they go next!

And last, but not least, a little concrete flower greeted Ms. Jeannie this morning when she went she out to water. This was a marvelous surprise, especially because Ms. Jeannie did not plant any impatiens this year – only last year.  And yet, here this little beauty is – growing out of a crack in the concrete right under the garden hose. Imagine such a feat!  This little seed must have overwintered and waited all summer to grow, grow, grow.  She is like a little last gift of summer before the Autumn settles in.

Ms. Jeannie can hardly wait to see what the next season has in store in the nature department!

10 thoughts on “Summer’s Cast of Characters”

There’s a real love affair going on in the front yard between the Rose of Sharon and the sugar maple. We aren’t sure who is trying to impress who the most but they are definitely showing off their brightest colors for each other. Summer loves Fall. Rose loves Sugar. And that’s all there is to say about that. 💜 🧡 (p.s. stop by our stories today to see the sugar maple in all its golden shades.)