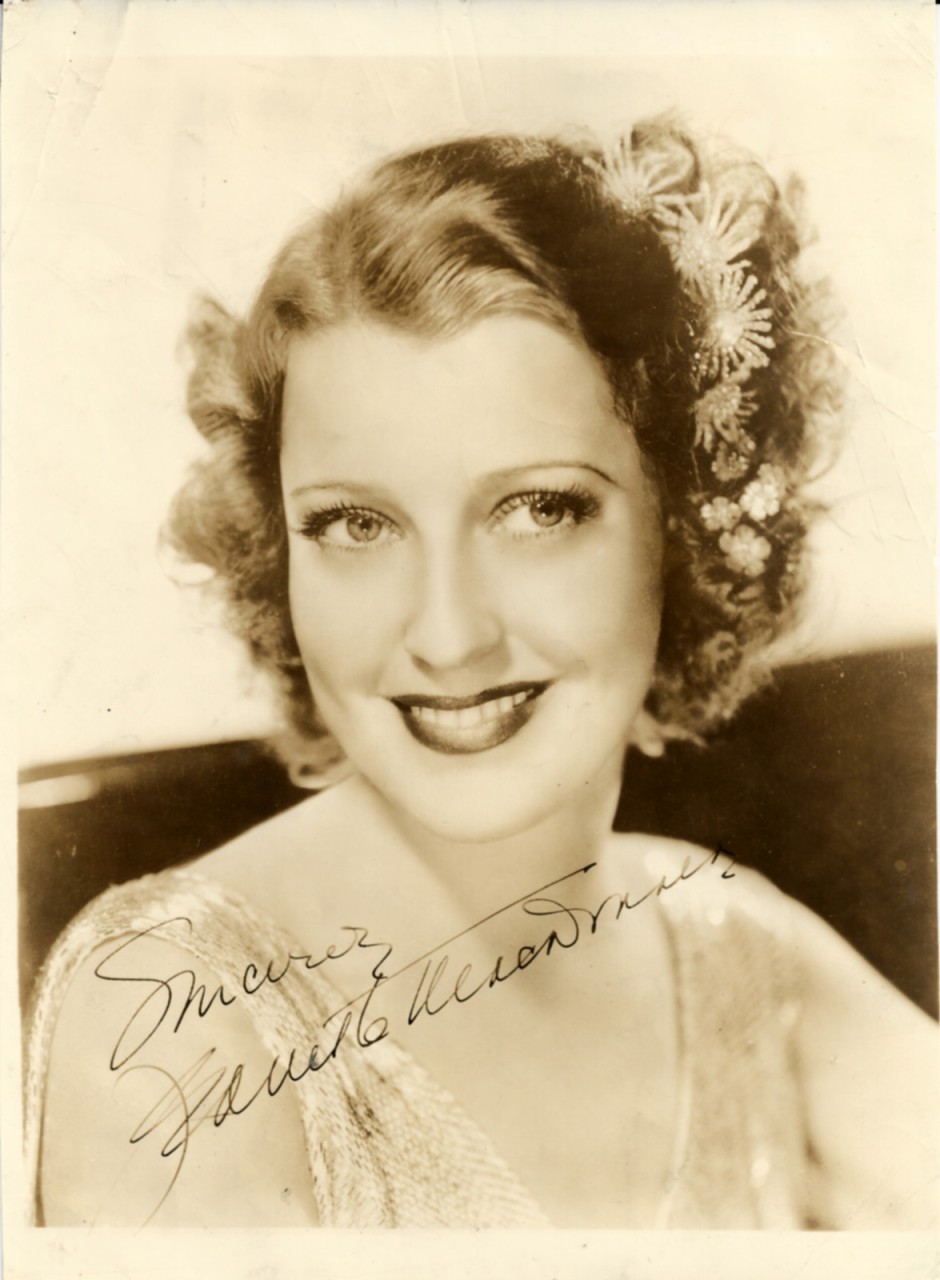 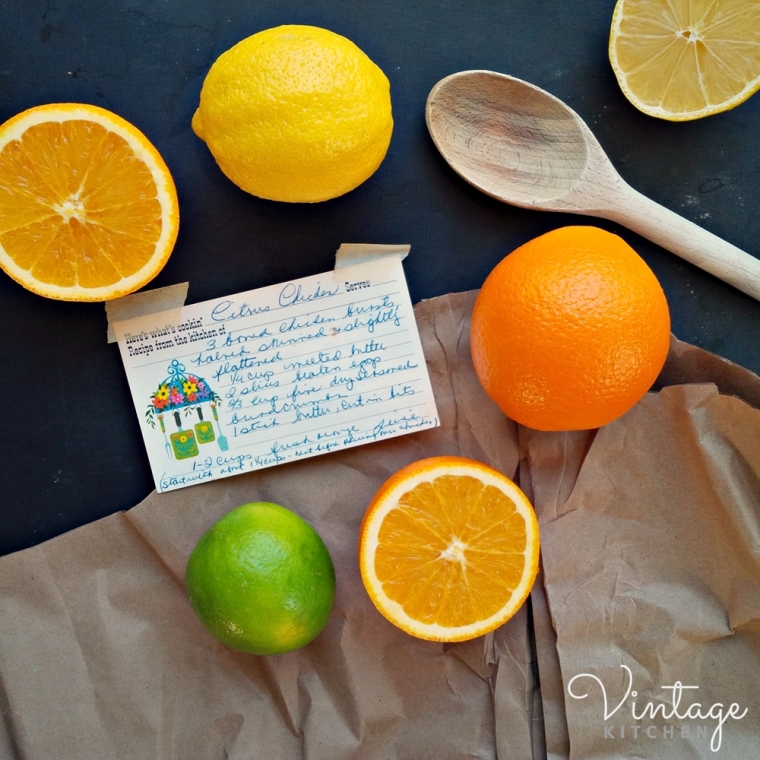 The last time we discussed food and film we were in Casablanca in the 1940’s with Ilsa and Rick and a batch of seasoned bar nuts.  Today’s post takes us to New York City in the 1940’s with a gal named Ilka and a platter full of chicken. It’s dinner and a movie day, and we are celebrating it family style!

On the screen is the movie Three Daring Daughters, a romantic comedy starring Jeanette MacDonald, who plays a single mom navigating the tricky waters of career, family and love. On the menu, is a vintage family recipe, Citrus Chicken with Fresh Oranges and Tarragon, which comes from the kitchen of my Aunt Patti, a self-taught gourmet cook who lived most of her life in California.

I was introduced to Three Daring Daughters thanks to an invitation to join the Singing Sweethearts blogathon, hosted by the Pure Entertainment Preservation Society this week. Not very familiar with Jeanette’s body of work, I learned a lot about this dynamic actress who was a favorite of 1930s and 1940’s movie-goers.

Originally a theater actress, Jeanette was born in Philadelphia and received her acting start on the stages of New York City in the early 1920s before heading west to California for screen work. A trained singer from childhood, she hit her stride in Hollywood, appearing in over two dozen musicals showcasing her operatic voice and garnering several Academy Award nominations.

Three Daring Daughters, was her second to last musical (released in 1948) and showcases the singing voice not only of Jeanette but also her three on-screen daughters, as well as the musical talents of famous real-life concert pianist Jose Iturbi.

In the movie, Jeanette plays Louise, single mom to Tess, Ilka and little Alix while also trying to balance a full-time editorial job at a popular magazine. Exhausted by work and home life, Louise’s doctor advises her to take a cruise vacation to Cuba, alone, in order to get some much-needed rest. On the boat, she meets Jose Iturbi, a handsome celebrity passenger who is immediately smitten with beautiful Louise. Meanwhile, her daughters, back in New York believe that their mother is worn out because she misses the companionship of her ex-husband (their father), so they arrange to have him arrive in New York just as Louise is returning from her vacation. As you can imagine, mayhem and misunderstanding ensue. We won’t give any more away to spoil the story, only to say that things don’t go quite as anyone expected.

Humorous, engaging and good-spirited, this romantic comedy is well-written, well-acted, beautifully presented and just a fun simple break from the action-packed movies dominating the modern theater scene today. The costumes and set design are gorgeous…

and the acting is marvelous, especially when it comes to the three daughters. Professionally trained child actors from an early age,  each of them had hopes of following in the career footsteps of Shirley Temple, so they were schooled in all areas of performance from singing and dancing to elocution, stage direction and character development.

Sweet without being sappy, Three Daring Daughters is a feel-good story full of the virtues of happy relationships and good intentions. In a combination that is reminiscent of  I Love Lucy, Little Women, and An Affair to Remember it’s hard to imagine anyone finding fault with this movie, but, surprisingly it was flagged for immorality due to that fact that Jeanette MacDonald’s character was a divorced woman successfully living on her own. That being said there are no deep psychological dramas to explore here and the entire theme of the movie is cheerful and upbeat. 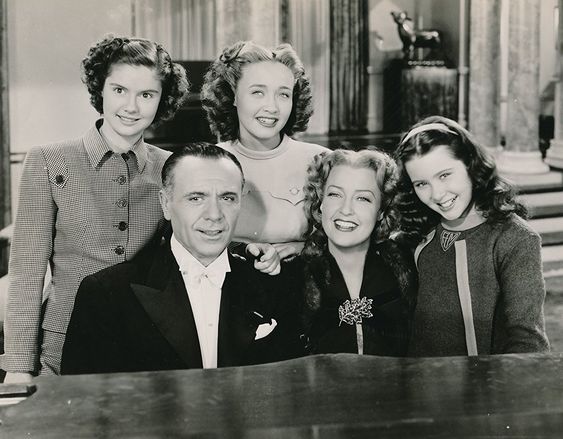 There’s also not much cooking going on in the film, so instead of recreating a dish from the movie, we pulled one from the family archives of Aunt Patti who was herself one of three young daughters in the 1940’s.

Like Tess (the oldest daughter) in the movie, Aunt Patti was the great big sister to her sisters and was especially connected to my mom.

Even though we lived on opposite coasts and didn’t see her as frequently as we would have liked she still looms large in my memory. She was a great hugger. Her husband, Buzz called her “Babe,” which my sisters and I thought was hysterical. And like so many ladies in my family, she was a talented seamstress and would often send us presents that she made. One year she sent a pair of three-foot-tall cloth horses for my dolls to ride around on. That seemed like magic! Even though she liked to keep busy and plan lots of activities when we were all together, she always found time to read the Winnie the Pooh series to my sister and I before bed or naptime. And she was a marvel at putting together big family theme dinners complete with decorations and costumes.

Tragically, she passed away in the mid-1990s from her second round of breast cancer, just a few months after celebrating her 62nd birthday. But she’s never far from our thoughts. Small memories pop-up in my mind about her all the time and of course, I have her hand-written recipes to keep me company in the kitchen.

Living among the fog clouds of Half Moon Bay, California, Aunt Patti was the only woman in my family, when I was growing up, that had a vegetable garden in her backyard, which to me was absolutely fantastic. She gathered much of her creativity in the kitchen from what she grew, so if there was one thing we could always count on at Aunt Patti’s house, it would be super fresh vegetables, lots of herbs and a fun time in the kitchen. She also subscribed to the Julia Child philosophy on butter – the more the better!

This recipe (written in her own hand) is for Citrus Chicken and features fresh oranges,  tarragon and the infamous butter. Sometimes, when I make this I cut the butter in half, but it’s really best prepared as Aunt Patti directed. If you serve it with a simple green salad on the side, the whole meal feels a bit more redemptive! It serves 3-6 people depending on portion size and keeps well in the fridge for chicken sandwiches the next day if you have left overs. 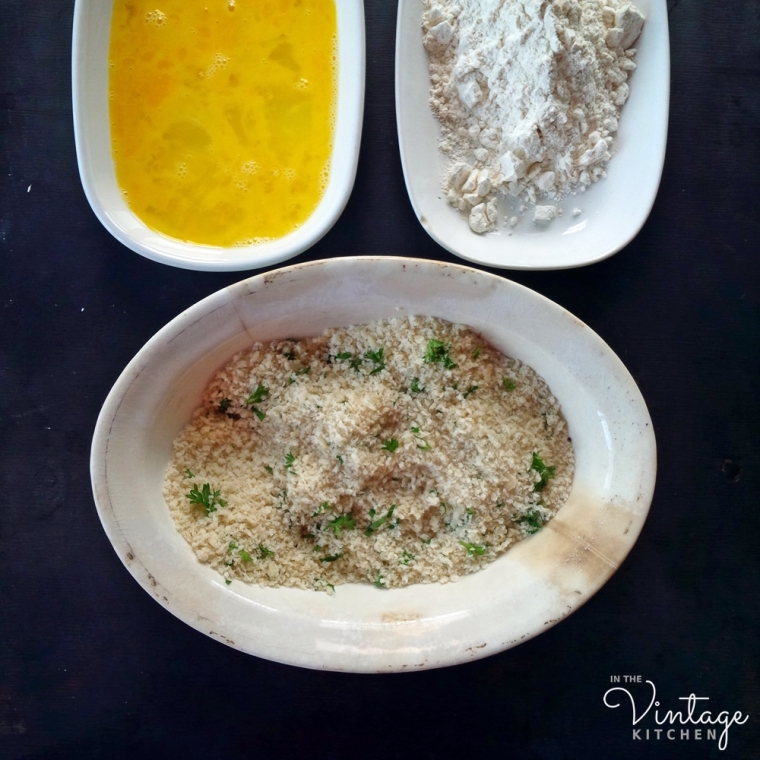 Roll in flour – dip in beaten egg and roll in breadcrumbs. Arrange in baking dish.

Dot with Butter. Bake 15 minutes at 400 degrees. In a bowl, mix orange juice, tarragon, and orange peel. Pour over chicken. Reduce temperature to 350 degrees. Cover and bake 35 more minutes, basting if necessary. (A little note: When it is done, the chicken will be wrapped in a soft breading blanket, if you’d like it to be a little bit crispy, simply remove the lid and place the dish under the broiler at 500 degrees for a few minutes until it begins to brown on top).

There are many ways to present this chicken… on a plate with other seasonal vegetables, alongside or in a salad of mixed green lettuces, or on a sandwich as mentioned above. In addition to being served hot out of the oven, it can also be served at room temperature, which makes it a great candidate for picnicking. We used to picnic with Aunt Patti on the beach, just a couple blocks from her house. I think she’d be thrilled at the idea that her recipe might be in your picnic basket one day too!

I think if Jeanette MacDonald and Aunt Patti had ever met in California, they would have been great friends. Jeanette was one of the few actresses in Hollywood who had to work hard at keeping weight on instead of worrying about taking it off. Aunt Patti could have cooked lots of great dishes for her (with lots of butter!). I’m not sure if Aunt Patti ever saw any of Jeanette’s movies, but she was a big fan of vintage and antique items just like me, so its safe to say that she probably would have would have loved Three Daring Daughters too. Afterall, she was one herself!

Cheers to families who are funny and daring and happy. And to beloved aunts whose spirits can still be felt in the kitchen.

Learn more about Jeanette MacDonald and her movies by visiting the Singing Sweethearts blogathon on the Pure Entertainment Preservation Society’s blog here.

And if you find yourself in the kitchen with Aunt Patti sometime soon, send us a message and let us know how it all turned out.

26 thoughts on “Vintage Dinner and a Movie: With Moms and Daughters and Aunts, Family Style!”

Meet Leopold, owner and operator of the L. Mohr Confectionary Company in St. Louis, MO. A German immigrant of Jewish faith, he was the city’s most favorite baker and caterer between the 1870s-1890s. He also was the inventor of a quirky Victorian-era machine called The Sponge and Egg. What was that exactly?! Pop over to the blog to learn more about the machine and the life of kind-hearted, enigmatic Leopold and his bustling baking career. His story was almost completely lost to history until an inquiry came into the Vintage Kitchen attached with a photo of a real life antique Sponge & Egg Machine. From there, his fascinating history began to unfold. Hope you love his story just as much!