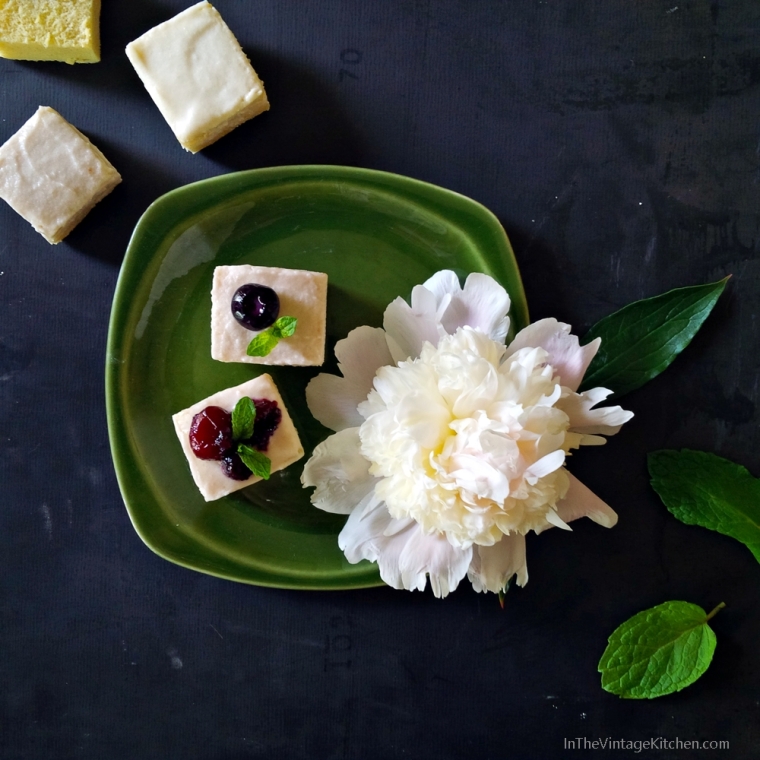 It just came to my realization that we haven’t done many dessert style recipes here on the blog, even though our instagram feed is full of vintage sweet treats that we have baked over the past two years. Today we are remedying that with a three piece recipe adventure just in time for Easter. I call it an adventure because I’d never charted these waters before, the journey wasn’t quite what I anticipated and surprise situations popped up right and left.

It all began with a 1960’s recipe that my grandmother had clipped from some unknown source and tucked inside her recipe box. When she passed away at the marvelous age of 97, I inherited her box and carefully preserved all the recipes in her own handwriting, while also pulling out all the collected newspaper/magazine/packaging recipes that sounded interesting. While looking through these the other day this one caught my eye… 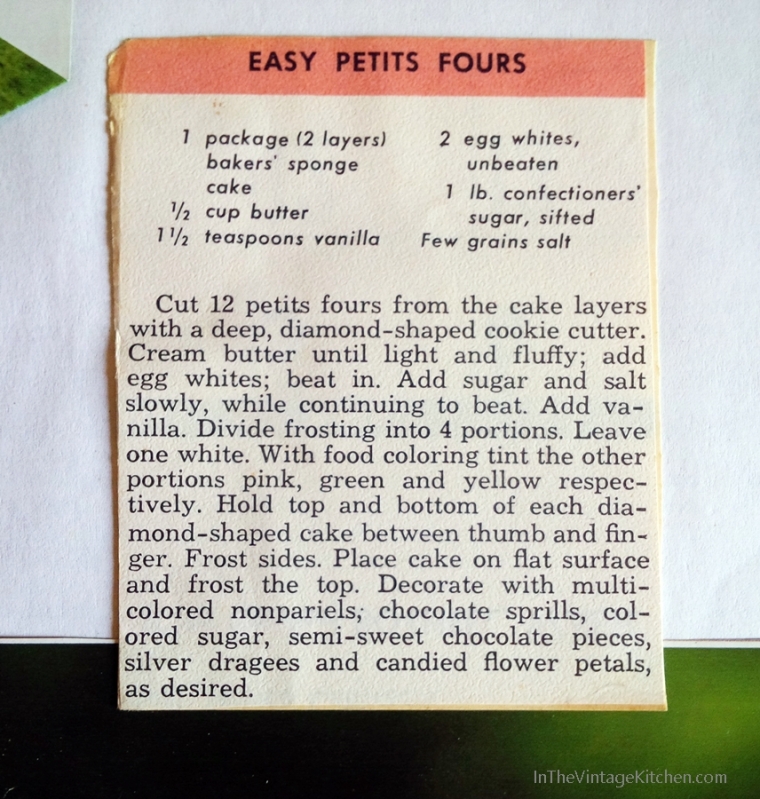 Easy petit fours! A fun colorful dessert for the Easter holiday. Perfect! I know I’ve eaten petit fours before – in France when I was young and most probably at a wedding or two since, but I don’t actually recall the details of those desserts except of course they were made of tidy little packages and came in an array of Easter egg colors.  My grandmother, Dorothy, never considered herself a confident cook (although everything she made was delicious) so the fact that this recipe was in her box and that it was labeled easy seemed the perfect foray into this age old French confection. With that in mind, I set off to make my very first batch. 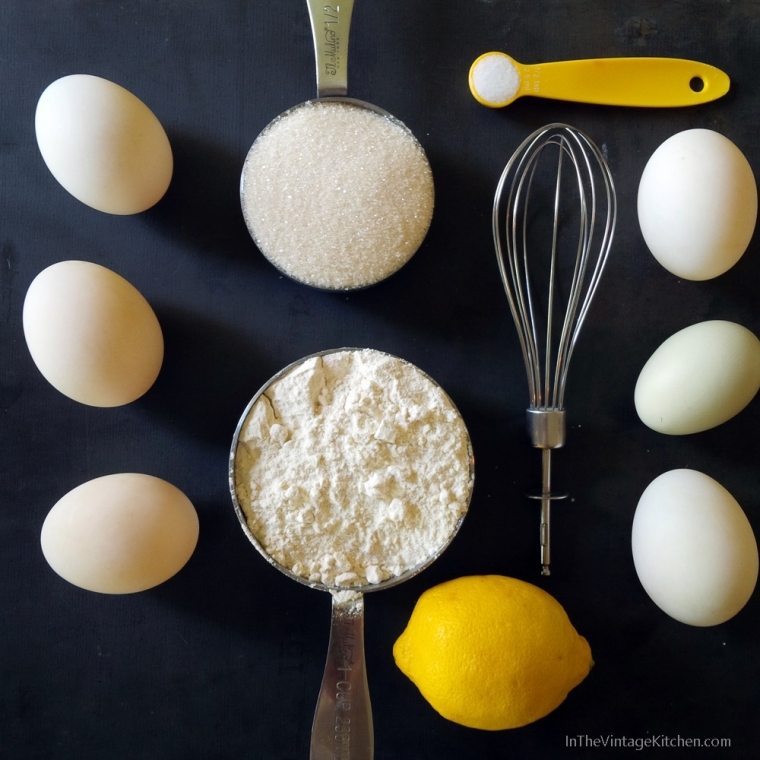 You’ll notice in the recipe above that the first ingredient is sponge cake – so I first started there, making a sponge cake from a recipe in Betty Crocker’s Picture Cook Book circa 1950. 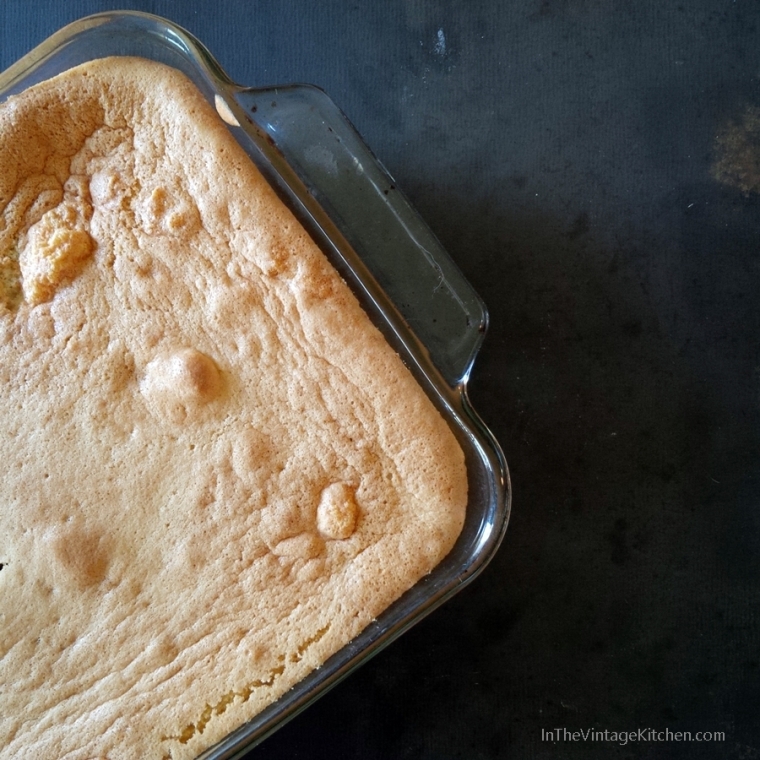 Next I went on to make the buttercream frosting from the 1960’s-era Easy Petit Four recipe, which with its five ingredients was super quick to whip up. So far so good! 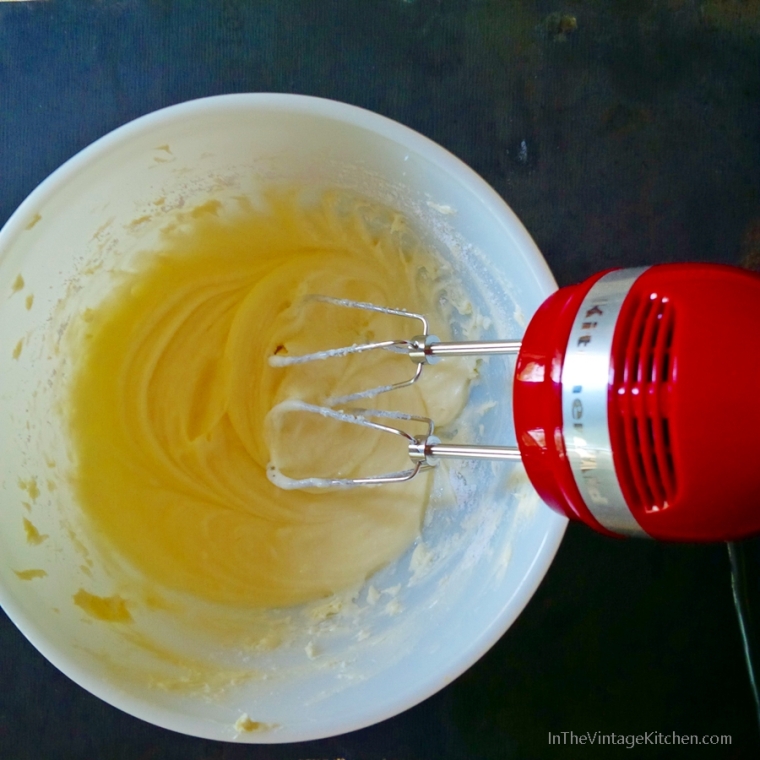 The Easy Petits Four recipe used food coloring to make the pretty pastel shades of this elegant, lady-like dessert. But not really a fan of the ingredients used to make food coloring (a mixture of mostly artificial and synthetic materials) I opted to create my own dyes using natural fruit juices.  In my head pastel pink and orange seemed like a pretty arrangement so in the blender I finely chopped cherries for the pink and then manderin oranges for the orange and strained each into separate bowls using cheesecloth.  As a just-in-case, I also, at the last minute, chopped and strained a batch of blackberries and blueberries for a purple shade if one of the other two colors didn’t work out. 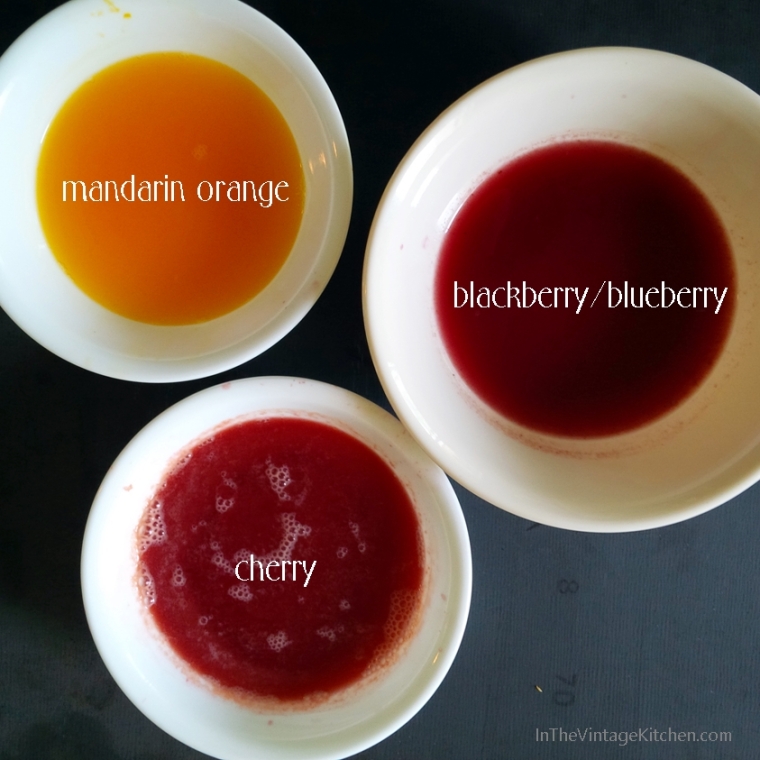 This was where things started to get a little tricky. When I divided the buttercream into four separate bowls, and added a few teaspoonfuls of natural juice dye as the Easy Petite Four recipe suggested, the buttercream barely changed color. I added more juice dye and the color brightened but then the buttercream became too liquidy.  So then I added more powdered sugar to bulk it back up again, which brought the buttercream color closer back to white again. You can see I had a situation on my hands. Setting these four batches of whites off to the side for a minute, I cut up the sponge cake into petite parcels and thought about some solutions to a bolder burst of color. 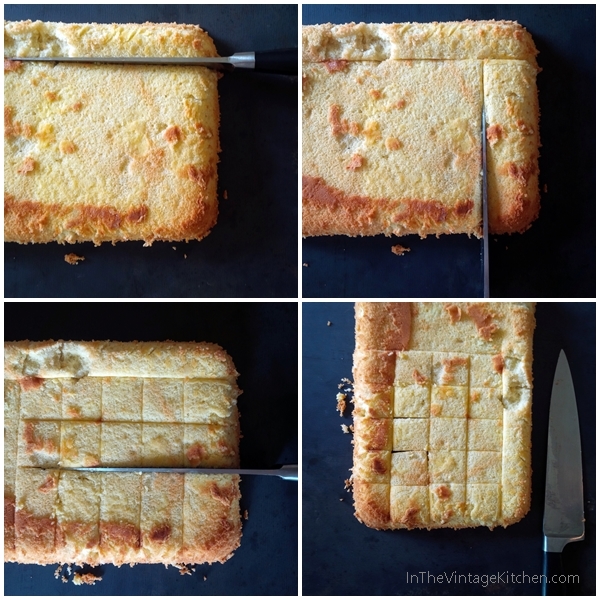 While I was cutting and the buttercream was resting, the colors in the bowl turned a little darker, so I trimmed up the little cakes into as even square shapes as possible (not the easiest of feats!)… 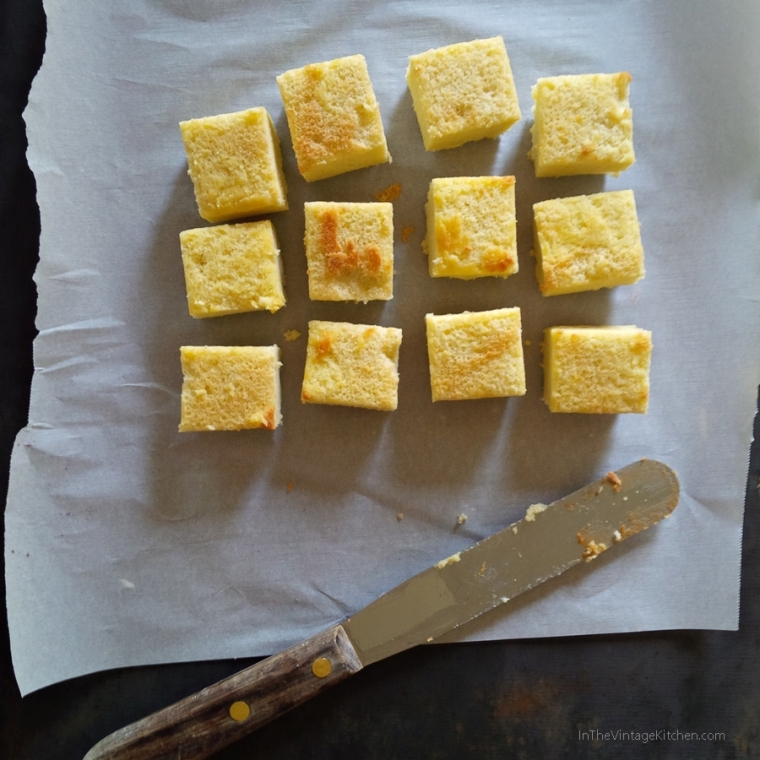 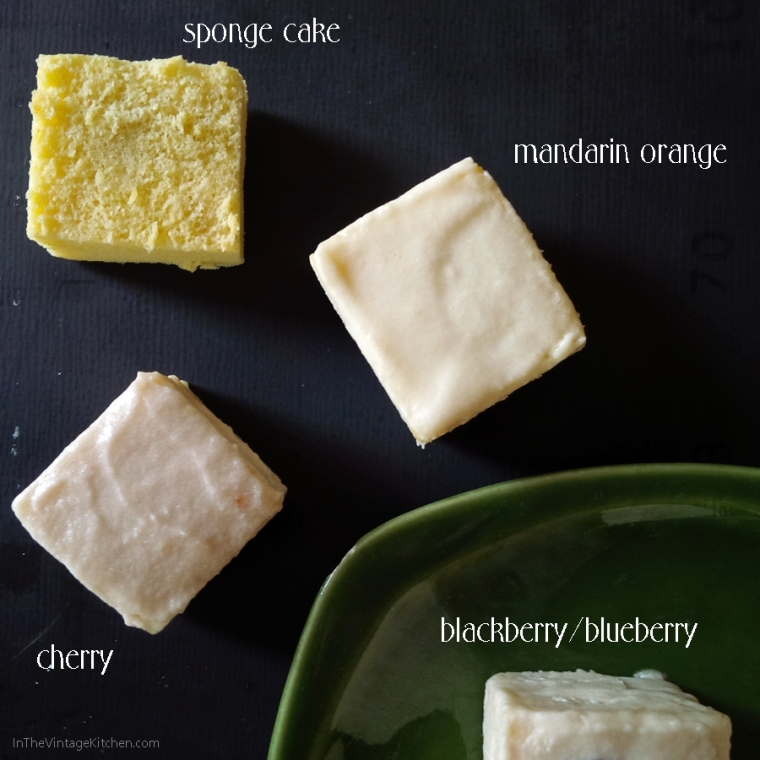 As you can see, there is slight (the slightest!) variation between all three frostings. Not exactly the dramatic shades I had in mind but at least they didn’t contain unnatural ingredients. By this point in the whole dessert endeavor I should have been ready to frost the rest of the batch, call this recipe done and serve them on a plate. The Easy Petit Four recipe suggested styling them with colored sugar or chocolate pieces or candied flowers.  But because my frosting was a little mild on the color spectrum, I opted for a different topper – a mixed berry reduction and fresh sprigs of mint which would lend a spirited dose of revelry to this celebration. To the stovetop I went… 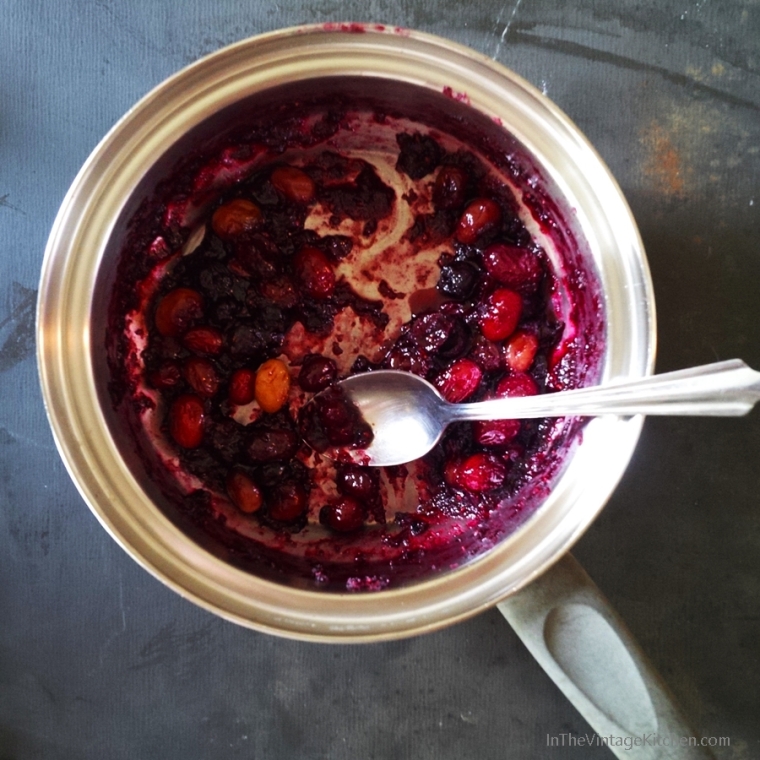 The colorful mixed berry reduction (a combination of red grapes, blackberries, blueberries, cranberries and raspberries) helped bring out the color in all the little petit fours and the flavors between fruit and cake were fresh and balanced. They definitely weren’t traditional but they were delicious. In the end these little bite-sized bundles turned out to be quite curious all on their own even though they didn’t wind up as originally intended. 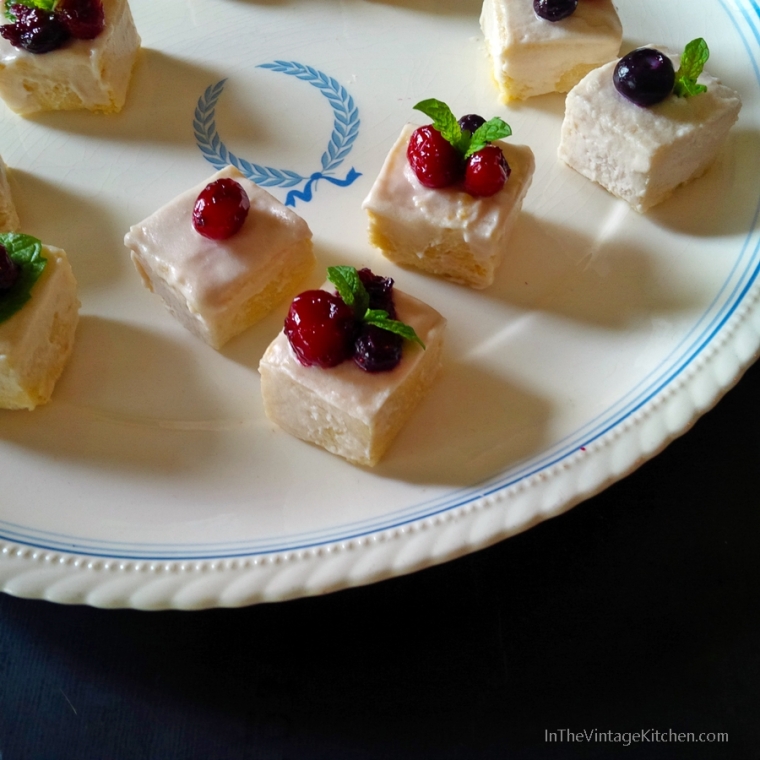 Which goes to show you that you can still learn new things from old recipes! It also means the easiest route is not necessarily the most healthy route. And even though it took about a half day to work through the process of this vintage recipe, I came up with two other ideas in relation to other meals – one for an appetizer and one for an hors d’oeuvres (more on those latter this spring).

Like any travel adventure I started out on this journey thinking that I’d already know what my final destination would look like but somewhere along the way this kitchen trip side-stepped my plans and led me down another path from which I ended up returning wiser and more curious. Petits fours are part of French cuisine defined as small cakes baked in small ovens. Which means any cake-like dessert has a chance to be a petit four. What I thought of as a fairly traditional dessert with a singular style really has no boundaries – nut butter, chocolate, jam, fruit, honey, whip cream, herbs, vegetables all have the opportunity to be whirled up into a petite confection. So in this sense petite fours are very easy, very accommodating. The natural fruit dyes on the other hand are still a work-in-progress! If you have any recommendations or helpful hints, please share!

Below are the three recipes needed to make up the Vintage Kitchen’s version of a petit four. The 1960’s Easy Petit Four Recipe below has been adadpted to suit this new minty fruit-topped version. If you’d like to make the original mid-century version please consult the recipe photo near the top of the this post.

Cut 24 petit fours from one sponge cake. Cream butter until light and fluffy; add egg whites, beat in. Add sugar and salt slowly while continuing to beat. Add vanilla. Divide frosting into 4 portions, leaving one white. With food coloring (or natural dye)  tint the other portions pink, green and yellow respectively. Hold top and bottom of each cake between thumb and finger. Frost sides. Place cake on flat-surface and frost the top. Decorate with your choice of embellishments.

8 oz. of assorted fresh berries (the smaller in size the better!)

Fresh mint for garnish (the smaller the leaves the better)