Today, dear readers, we are going on a wonderful culinary adventure that is taking us from Greece to Long Island, New York  to Ms. Jeannie’s kitchen in Georgia.  The subject of our adventure is a recipe from this Greek cookbook Ms. Jeannie has for sale in her Etsy shop…

The recipes in The Art of Greek Cookery were compiled in 1958, by 16 first generation Greek women who lived in Hempstead, New York and were part of the congregation of St. Paul’s Greek Orthodox Church.

The Church, which was formed in 1944, needed to expand as their congregation grew, so the ladies of the Church formed a recipe committee, which was a segment of the church’s social organization, the Mr. & Mrs. Club (so cute!). The intention of the recipe committee was to gather traditional recipes from their homeland into a book for American cooks and then to sell the books as a fundraiser for the new building construction. In true Julia Child spirit,  these ladies got to work gathering, testing and and adapting hundreds of recipes that were representatives of their Greek culture.  This is a picture of some of the original members of the recipe club…

After two and half years of laboring,  they published a simple spiral bound cookbook entitled, The Grecian Gourmet, which turned out to be a runaway success. Both the The New York Times and the New York Tribune published articles about the women and their book project, which caught the attention of people all across the country and book orders poured in.

The recipe committee was humbled and amazed that their little cookbook had become such a sensation.

“It was a book that had immense appeal for all food conscious people. For gourmets and experimental cooks of all kinds; for tourists who upon returning from Greece, wished to duplicate  in their own kitchens some of the interesting and exciting dishes they had tasted in Greece on the Grecian islands. It was a work of love and a great pleasure for all of us.” – Theodora Lourekas, Chairmen of the Recipe Committee, 1963.

The cookbook also caught the attention of New York publishing giant Doubleday and Company, who wanted to republish it under their “Art of ” cookbook series. And so the Art of Greek Cookery was born in 1963.

Containing a wealth of recipes ranging from appetizers to desserts, the cookbook also contains information on Greek wines, traditional feast days, customs, traditions, suggested menus and a lovely forward by the then pastor, Father George Papadeas. To say that he was not only proud but impressed by the hard work and determination of these women was an understatement.  Just by reading the forward, preface and introduction of this cookbook you can tell that so much love and good cheer was behind this project.

100% of the proceeds from the book sales went into the church construction fund, which provided them with more than enough money to undertake the expansion.  Both the Church and the recipe club are still going strong today!

So in true spirit, Ms. Jeannie embarked on a new cooking challenge and made one of the recipes from the book. Ideally, she would have liked to have chosen a lamb recipe, since that is so traditional, but Ms. Jeannie feels bad for the little lambs and doesn’t know of a local, ethically sourced lamb company, so she chose a chicken dish instead. It had five ingredients and was ready within an hour. And it was DELICIOUS (with a big capital D!). Here’s the recipe…

Chicken with Scallions (also known as Kotopoulo me Kremidakia Freska)

Rinse chicken pieces and pat dry with paper towels. In a Dutch oven (or you can use a large soup pot) melt the butter, add the chicken pieces and brown until golden on all sides. Sprinkle with salt and pepper. *Add hot water and scallions. Cover and cook over low-heat for one hour.

Remove chicken from pan and place on a plate. Add the egg mixture to the pan broth and stir constantly for another minute to avoid curdling. Add the chicken back into the pot to soak up the sauce. The heat under the pan must be on low and the sauce must not be allowed to boil. Let the chicken rest in the sauce fora few minutes before removing from heat and serving.

* Special note – Ms. Jeannie doesn’t have a Dutch oven so she used a large soup pot. After she browned the chicken and before she added the water and scallions, she de-glazed the pan with 1/4 cup of white wine just because her pot tends to burn easily. If you are using a Dutch oven you might not need to add that step at all.

Once Ms. Jeannie placed the chicken and sauce in a serving dish she sprinkled it with some chives from her garden. This of course is optional. She served the chicken with a simple homegrown tomato basil salad which was marinated in olive oil and garlic for an hour, a crusty baguette and a glass of sauvignon blanc. Enjoying an authentic Greek dinner outside on the patio with Mr. Jeannie Ology made Ms. Jeannie feel like she was on a little vacation! 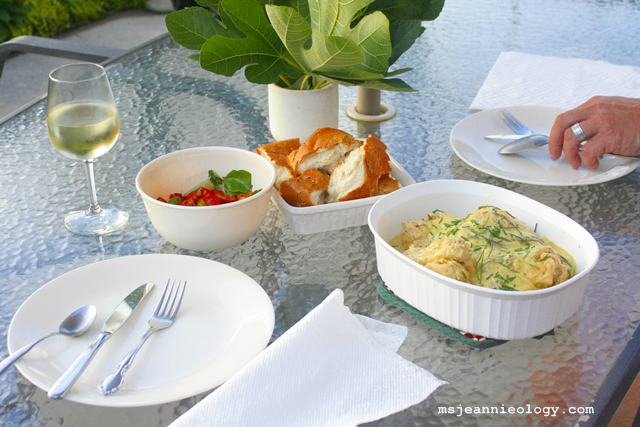 It is armchair traveling at its best and most delicious! Cheers or Opa (as they like to say in Greece)!

All the soft and subtle colors of a pastel winter sky:) 💕