Boring. Irrelevant. Out of touch. Those are three of the most common misconceptions Ms. Jeannie encounters when discussing vintage books. How could something written 50, 100 or even 200 years ago still be compelling in today’s modern world? Thanks to the lovely marriage between film and books Ms. Jeannie is going to show you how with these 20 examples of old books that made fabulous modern films. Movie trailers are linked to each picture, so click on any and all to get a feel for story lines. Chances are if you like the movie (or in this case, the trailer) than you’ll love the book even more!

These are of course just a few examples of the themes timeless books lend to our lives. More examples will come in a future blog post, but for now Ms. Jeannie will leave you in the good hands of these good characters. Go right ahead and fall in love with Tom Jones, even though he’s 200 years old.  Feel the confident energy of Thor Heyerdahl even though his adventure occurred six decades ago. Relate to Holly’s vulnerability and Karen’s isolation. Get revved up by Chance’s take-life-as-it-comes attitude and Walter’s grab-life-by-the-horns manifesto. Fun things never age and fun books are no exception!

Need help finding a good book? Ms. Jeannie’s your gal. Post a message in the comments section and she’ll be in touch!

Ms. Jeannie is a collector of books on Africa. Mostly she loves those fish out of water stories, either fiction or non-fiction,  about people that discover Africa through their own experience.

Having had the opportunity to visit both the Ivory Coast (west Africa) and Morocco when she was young, Ms. Jeannie can appreciate that Africa means different things to different people. Ms. Jeannie’s experience was full of pink buildings and dusty red roads, sugar sweet pineapple (the best she has ever eaten in her life), black black faces and bright white smiles, medicine men and open air markets,  belly dancers and mosaic tiles.

In Morocco, she woke up every day to the sounds of street sweepers sweeping the streets with palm fronds, a soft scratchy whoohsing sound that was exotic and comforting all in one.  She learned how to play squash and how to belly dance. She saw a snake charmer in the marketplace and watched the vendors sell, nap and chase customers and the children tag along behind hunting chiclets gum.

The following books represent many different viewpoints on Africa spread out over a century. There is politics, family, romance, nature, friendship, death, disease, prejudice… but one universal theme exists between them all… that Africa is wild. It’s what Ms. Jeannie felt the entire time, she was there. No exceptions. No airs. No rationalizations. Just nature in all its grandeur and brutality….

1.  I Married Adventure by Osa Johnson. Originally published in 1940.

Ms. Jeannie first came upon this book while antique shopping on her honeymoon. Funny, this is how she felt marrying Mr. Jeannie Ology:)  Detailing the lives of adventuring filmmakers, Martin & Osa Johnson, I Married Adventure portrays Africa from two interesting perspectives – newlyweds and artists. 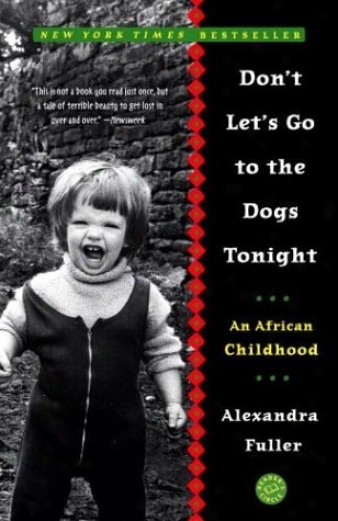 A book about growing up in Africa certainly, but most intersting, a book about family. Told from Bobo’s (Alexandra Fuller) fresh perspective as a child of politically charged bohemian parents, Bobo’s childhood was anything but ordianry. She captures the relationship between her and her sister with such relateability that Ms. Jeannie laughed out loud and then called her own sister to recommend it.

3. West With the Night – Beryl Markham. Originally published in 1942.

Full of graceful, beautiful writing from a woman who became the first female pilot to fly solo across the Atlantic, this book pulls you in from page one.  An excerpt from the opening paragraphs gives you a glimpse into her writing style:   “After all, I am no weaver. Weavers create. This is remembrance – re visitation; and names are keys that open corridors no longer fresh in the mind, but nonetheless familiar in the heart.”

As a sidenote: Ms. Jeannie first discovered this book in her junior year of college. Needing a monologue to recite for speech class her father suggested something from West With The Night. Ms. Jeannie read it cover to cover in two days and recited a four page  passage about the feeling of flying. Her professor said it was too long but her classmates were intrigued:)

4. Woman in the Mists – Farley Mowat. Originally published in 1998.

If you’ve seen the movie Gorillas In The Mist, starring Sigourney Weaver then you’ll know the precipice of this biography. Dian Fossey was a woman all her own. Like Jane Goodall, she felt called to become an animal advocate. Shedding her contemporary lifestyle to study animals in their environment, she made it her life-long mission to bring attention to the lives of the mountain gorillas of Africa. It was a brave decision and her lifelong work intensive and noble to say the least, but purposefulness also came with a price and Farley Mowat delicately describes both the strengths and the weaknesses of one women’s attempt at tremendous action.

Romantic, nostologic, glamorous, adventurous – this true life story about Baroness Karen von Blixen who moves to Africa to start a coffee plantation, has it all. After you read it, be sure to watch the movie, Out of Africa, starring Meryl Streep and Robert Redford. Stunning on both accounts.

Like Don’t Let’s Go to the Dogs Tonight, this book is about family as much as it is about Africa. Although it is a novel, it reads like non-fiction, full of relatable characters and circumstances. Each chapter is written from the voice of one of the four Price daughters and their mother (with the the littlest one being Ms. Jeannie’s most favorite!), so you get a really well rounded sense of their lifestyle  in the Belgian Congo as their father attempts to connect with the locals through his missionary work. This is not a book about religion, so don’t let the title dispel you.

7.  The Making of The African Queen by Katharine Hepburn. Originally published in 1987.

Who can resist Katharine Hepburn’s viewpoint on anything?! Packed full of her usual charm and wit, The Making of is fun for movie buffs who like to learn about what goes on behind the camera. The movie, The African Queen, came out in 1951 and starred Kate, Humphrey Bogart and Robert Morley. It was directed by John Huston. Humphrey Bogart plays a riverboat captain and Katharine Hepburn, a prime and proper missionary. They are a hilarious pairing:)

8.  Rules of the Wild – Francesca Marciano. Originally published in 1999.

Rules of the Wild centers around a group of fictitious expatriates living in Kenya.  At the heart of the story is Esme, who gives us her perspective on life and love in the wilds of African culture. Like, West With The Night, it is beautifully poetic and Esme provides intimate details about life in Africa that you would have never considered. Here is the opening paragraph…

“In a way, everything here is always secondhand. You will inherit a car from someone who has decided to leave the country, which you will then sell to one of your friends. You will move into a new house where you have already been when someone else lived there and had great parties in which you got incredibly drunk, and someone you know will move in when you decide to move out. You will make love to someone who has slept with all your friends. There will never be anything brand new in your life.”

9. The Power of One – Bryce Courtenay. Originally published in 1989.

Ms. Jeannie got caught up in the energy and determination of  the energetic main character Peekay. If you are looking for a book to inspire you or cheer you up – then this is the one! Ms. Jeannie won’t spoil any of the plot, but after you’ve read it be sure not to miss the movie of the same title – beautifully crafted – just like the book.

10. The Flame Trees of Thika – Elspeth Huxley, originally published in 1959

Ms. Jeannie is just at the start of this book – but already she loves it. This a true account of Elspeth’s childhood as she and her parents set up house in Kenya in the early part of the 1900’s.  Ms. Jeannie is reading the illustrated 1987 edition which contains family photographs as well as beautifully rendered illustrations by Kenyan artist, Francesca Pelizzoli.

If you’ve read any of these, please share your thoughts with us! If not, happy reading:)

100 years ago this basket was made by hand for gathering vegetables. 100 years later and it’s still gathering vegetables:) 🥒 I’d like to say that these cucumbers and melon came from our garden, but alas, we are still market shopping as the heirloom garden is still growing growing growing. First flowers appeared on the cucumbers this week so it looks like an end of summer harvest it will be. #cucumbersforfall