So a little bit ago, Ms. Jeannie met this wonderful character whom she affectionately called Christmas Pig…

Ms. Jeannie’s not one to notice looks first, but as you can see, he was nothing but handsome, with his distinguished rusty patches and his shabby chic patina. This pig had personality written all over him.

Ms. Jeannie made a home and a job for him on her kitchen shelves, holding down her fort of antique ironstone platters.

Pig seemed suited there for awhile. Each morning he’d greet Ms. Jeannie with a smile and a story. He’d recount his past, as she stood sleepy-eyed at the counter waiting for the coffee to brew.

A long time ago, Pig was born into a cast iron stable set made in England. His barn mates included a cow and a horse, a rooster, a lamb and some chickens, possibly there was a goat too (this part is a little hazy).

The stable was owned by a blond boy named Hugh, who fancied short pants and jam sandwiches and calling his mom, Mum. At some point in Pig’s early life, he  and Hugh crossed the great ocean together, journeying to America via steamer ship. The crossing was long, but every afternoon, Hugh took Pig out to the lido deck to show him the waves and the water. The salt air settled on their skin.

Boy and Pig wound up in a wonderful old house in the States. Years passed. The boy grew up. Pig was packed away. For years Pig stayed among the packing papers dreaming of what his future would hold. One day, when he could stand the confines of the box no more,  he mustered the courage to leave his world behind.  Discovery was calling and Pig proclaimed himself a new explorer. 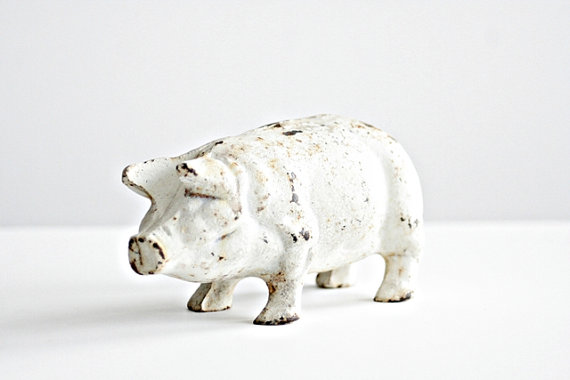 Fate eventually led Pig to Georgia. And then to Ms. Jeannie, where they became fast friends. Together they settled into Southern life.

But soon, Pig began to grow restless. Even though he enjoyed Ms. Jeannie’s company and his job of guarding the ironstone, he began to get antsy.  His hooves started knocking against the shelves, then against the platters. At first it was just light little taps – barely audible, but as the days progressed,  the taps grew louder and louder until they could no longer be ignored.

Ms. Jeannie understood.   A restless spirit cannot be contained. It was time for Pig to move on.

“Let’s make this next trip spontaneous,” he told Ms. Jeannie. “You arrange it and I’ll go. Anywhere in the world.”

And spontaneous it was going to be! Exotic even. Ms. Jeannie was in touch with a lovely lady in Singapore who was ready to give Pig his next story. Thrilled by the prospect of crossing oceans again, Pig packed his bags, practiced his Chinese and headed off to the post office.  Unfortunately, a one way postal ticket to Singapore wound up to be a much larger expense then even a Pig could afford, so he returned to Ms. Jeannie’s shelf once again. His dreams of Asian escapades so short lived he couldn’t even remember what they were.

“Keep your chin up,” Ms. Jeannie said. “Something will come along soon.”

Pig sighed and wallowed and tapped around for two days, before Ms. Jeannie reported good news. A porcine model was needed ASAP in New York City for a Christmas production! Pig was perfect for the part!

Giddy, Pig packed again. While he got ready, Ms. Jeannie told him of all of her New York City adventures growing up as a girl. Pig listened intently to every word. His imagination swirling with all the sights and the sounds and the possibilities that Ms. Jeannie suggested.

“Goodbye, sweet Pig,” Ms. Jeannie said as she dropped him off at the post office. “Keep in touch,” she whispered.

Two days later, Ms. Jeannie was delighted to receive a picture and a note from Christmas Pig…

I did arrive in the city that never sleeps today, safe and sound! I’m enjoying the view from my new home and I’ll secretly tell you something: my new family is talking about me moving to some summer cottage, but I’m enjoying the bright lights in the city and I have bigger plans now… after my first model gig I’m going to look for an agent and I promise you, you will soon see me as a star on Broadway! I’ll blink at you from the posters!

Be on the lookout readers – the next famous pig in the city could be our very own;)

The first entry in The Greenhouse Diaries is posted over on the blog! In this new once a week series, we’ll be sharing our adventures of growing food and flowers in this 4’x 6’ New England greenhouse over the winter months. 🌱 Stop by the post and see what we are growing inside and learn about the 20th century writer who inspired this project. Can you guess who she is just from her photo?!