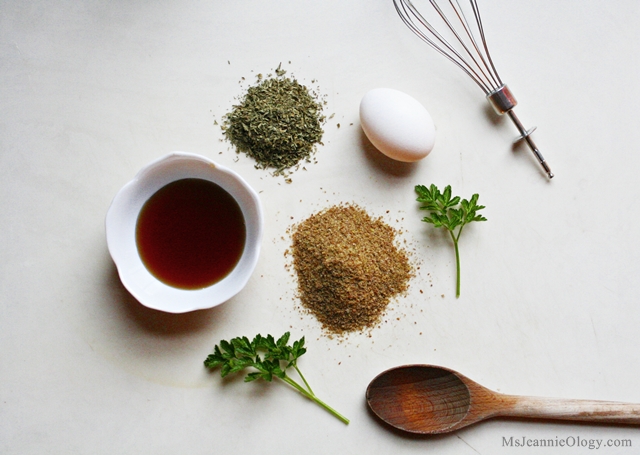 In this week’s culinary adventure, Ms. Jeannie is focusing on something delicious for canine-minded readers of the blog: organic flaxseed dog treats! Or biscuits, if you’d like to correctly call them.

Around “officially” for over 150 years, specialty biscuits for dogs were created by this enterprising American electrician…

James Spratt, who patented Spratt’s Meat Fribrine Dog Cakes, after he noticed a pack of dogs chewing on hardtack biscuits in the street. The city of London became his manufacturing mecca of choice in the 1870’s where his dog treats became quite a big British hit.

Before long, exclusivity was compromised and the Bennett Brothers of New York City took note of the popular Spratt product and brought the concept home to America.

The Bennett Biscuit Company was established in the NYC’s Lower East Side in the early 1900’s, making Maltoid’s – milk, mineral and meat dog treats. Later Bennett’s biscuit company would be bought by National Biscuit Company (know known as Nabisco) and their production of Milk-Bone dog biscuits would become a household name by the 1940’s. 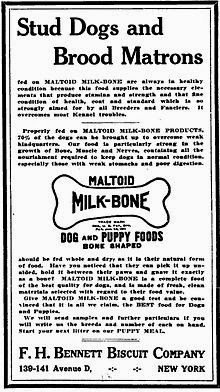 But because Indie has some food allergies and has to therefore exclude most grains from her diet (and unfortunately most over-the-counter dog treats like Milk-Bones), Ms. Jeannie is always on the lookout for a good recipe that won’t give Indie a rash.

Ms. Jeannie has found a favorite in this organic recipe and as you can see Indie is quite an enthusiastic kitchen helper when these are on the baking menu! 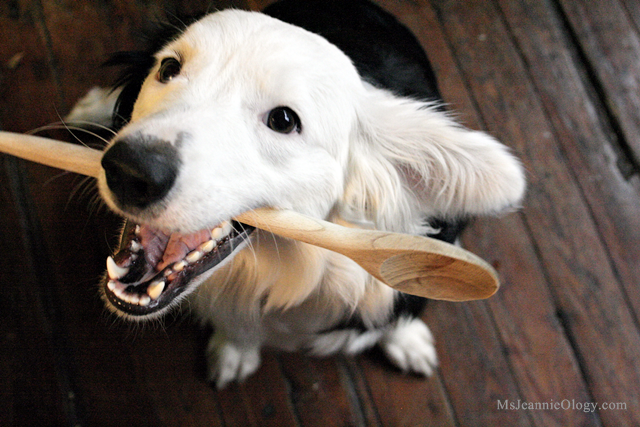 Simple, easy to make and abundant in quantity you start out by combining yeast, warm water, chicken broth, maple syrup, dry parsley and an egg in a large mixing bowl… 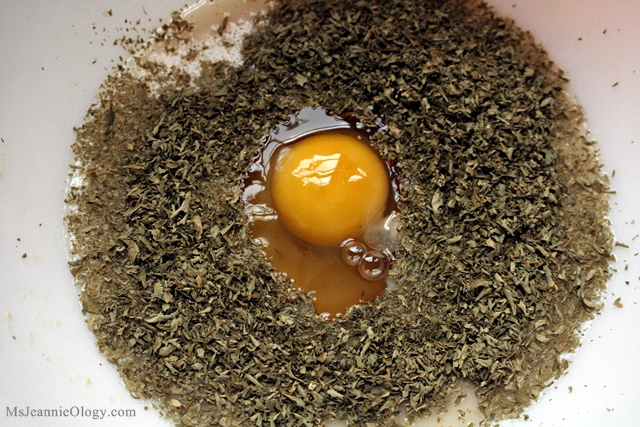 Next, roll the dough into a ball and knead for a few minutes… 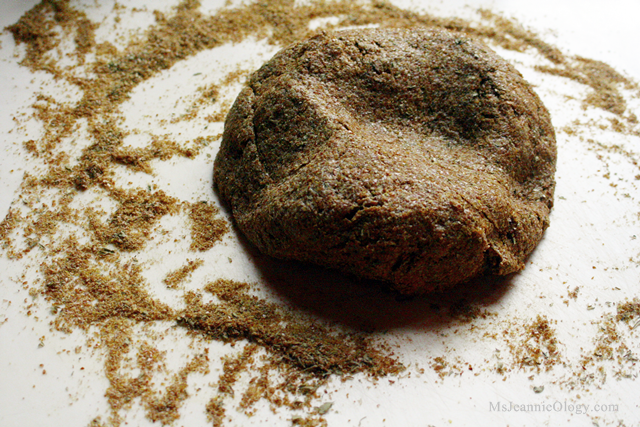 Then you are ready to roll the dough out in a thin layer and cut out the shapes.  Ms. Jeannie lost her cookie cutters in the move somewhere so she improvised using the openings of two different sized glass jars… 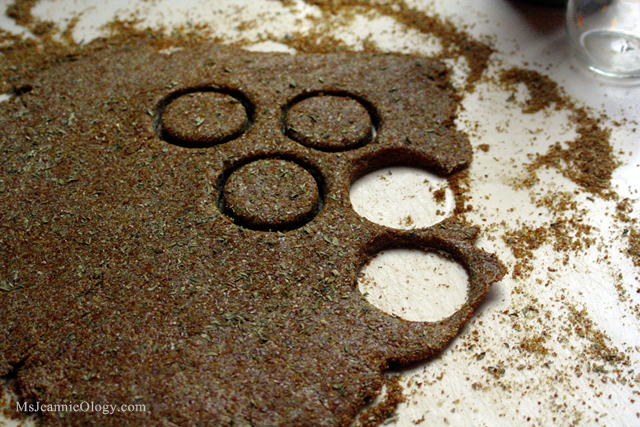 Once you have all shapes cut out – place them on an un-greased cookie sheet and bake them in a 350 degree oven for 30 minutes. Turn them over and bake for an additional 15 minutes.  Once finished in the oven, let them cool on a rack for an hour. 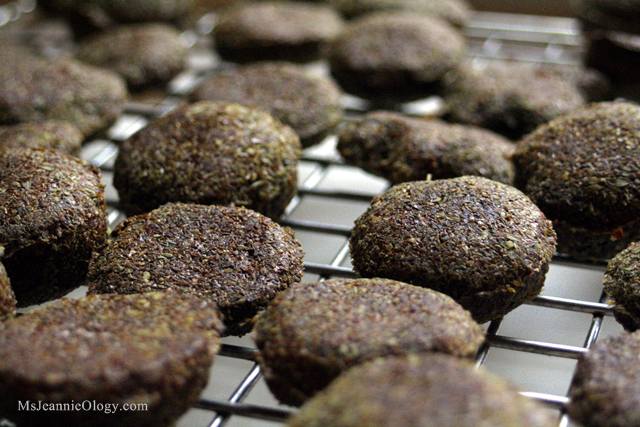 Depending on the thickness of your dough – you can make chubby treats or paper thin treats. Ms. Jeannie likes to do a mixture of both. On the days when Indie does something really good or listens really well – she’ll get a chubby treat:)

By the time you get to this stage you’ll have several dozen homemade dog treats and one anxious sampler at your feet. 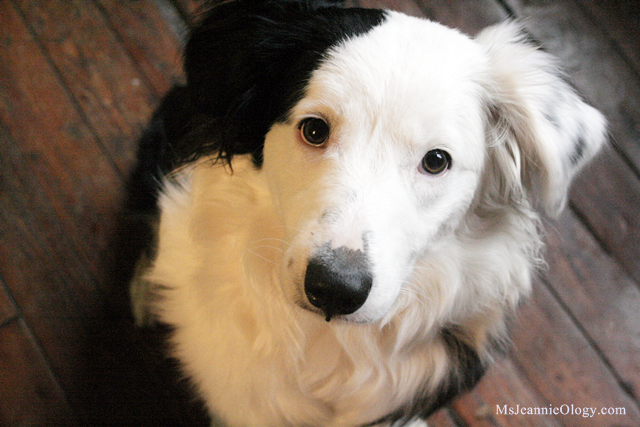 If you’d like to share your treats, it is fun to package them up and give them as little gifts to the extra-special creatures in your life. They make fun hostess gifts, thank you gifts and special holiday gifts.  Or if there is a secret canine valentine in your life…

… you’ll win their heart by giving them these:)

Preheat oven to 350.  Dissolve yeast in lukewarm water in a large mixing bowl. Add parsley, broth, syrup, and egg and stir to combine. Slowly mix in the flaxseed meal until it forms a stiff dough. Form dough into a ball and transfer it to a flat surface (you can sprinkle some additional flaxseed and parsley on the surface so that the dough will not stick) and knead for a few minutes.

Store all baked treats in an air-tight container.

Who made the best white birch beer in the country? Undina! The Undina Beverage Company of Higganum CT was named after the goddess of water and it was that key ingredient, sourced from a crystal clear hillside stream that locals say made the tasting beer. 🥤 In the 1960s, when this crate was made, Undina was shipping birch beer all across the country, but by the 1980s, the stream could not keep up with demand and the bottling works closed. Nothing else could compare to “the wild heart of nature that continuously leaps and dances.” We just love that this birch beer company’s most respected co-worker was Mother Nature and the stream she made. 💧