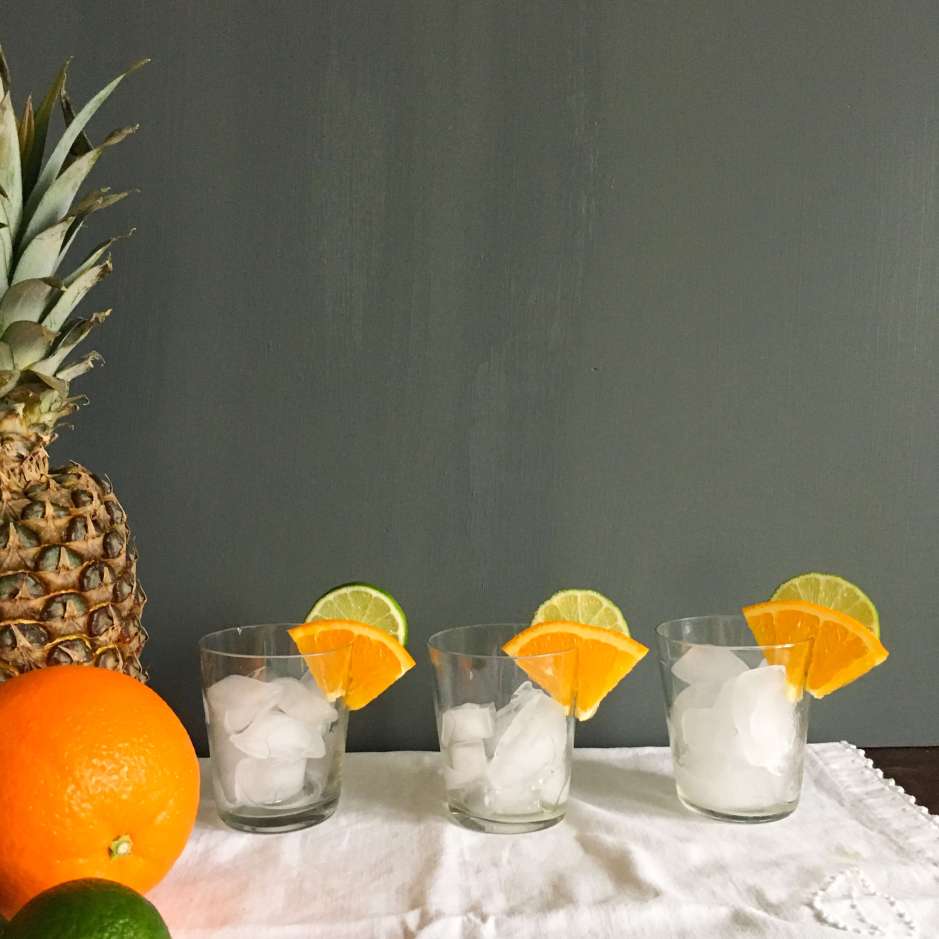 Right now, as I write this post its 43 degrees outside and raining. There has been a thick grey cloud cover that has been hanging over the city for what feels like weeks. The forecast for the next seven days is rain, rain and more rain. Not quite cold enough to snow (which would be magic) and not quite warm enough to picnic (also magic), winter has definitely settled. But not indoors. Inside it is paradise.

In the Kitchen today, it’s a balmy 72 degrees (thanks to the heat setting!), there’s calypso music playing on the speakers and a special tropical cocktail circulating. The mood is downright beachy as Harry Belafonte encourages us to jump in the line and Lord Invader sings about the flying fishes.  Welcome my friends to Week Four of the International Vintage Recipe Tour. Welcome to Barbados!

This week, we are embracing the relaxed ambiance of the tropics as we make Rum Punch for a crowd and dance around the Kitchen to traditional island music. It’s celebration time in more ways then one. On a personal note,  we’ve hit a mini milestone.  If you joined us from the beginning, we are now officially one month into the Recipe Tour and I hope you are still as excited about the whole project as I am. On a party note, this recipe serves 12 or more, so if you ever wanted to invite your friends over to try a vintage recipe, now’s a good time:)

Last week’s post took us on a romp around snow-capped  Austria with a local native, and featured a hearty vintage chicken recipe perfect for winter weather. This week, we are traveling 4,800 miles from Austria to a tropical island in the Atlantic Ocean that lies in close proximity to South America. There’s no snow in sight here.  There is, however, plenty of snow white sand.

Travel these days doesn’t always guarantee what you’ve  imagined, but Barbados  delivers when it comes to beautiful beaches, a fun atmosphere and endless amounts of rum. They’ve been making this sugar cane based spirit since 1703, so its easy to see why this is the alcohol of choice when it comes to island drinks.

Mount Gay Rum is the oldest distillery in Barbados, dating all the way back to the 1700’s, but for this vintage 1970’s era rum punch recipe, which simply called for any type of dark rum, I chose Kraken (a more modern Caribbean rum company)  for it’s fun, splashy label which was modeled after Victorian era typography, its nod towards oceanic intrigue, and its new yet old bottle design (a style that was easy to hang from hooks to avoid breakage). 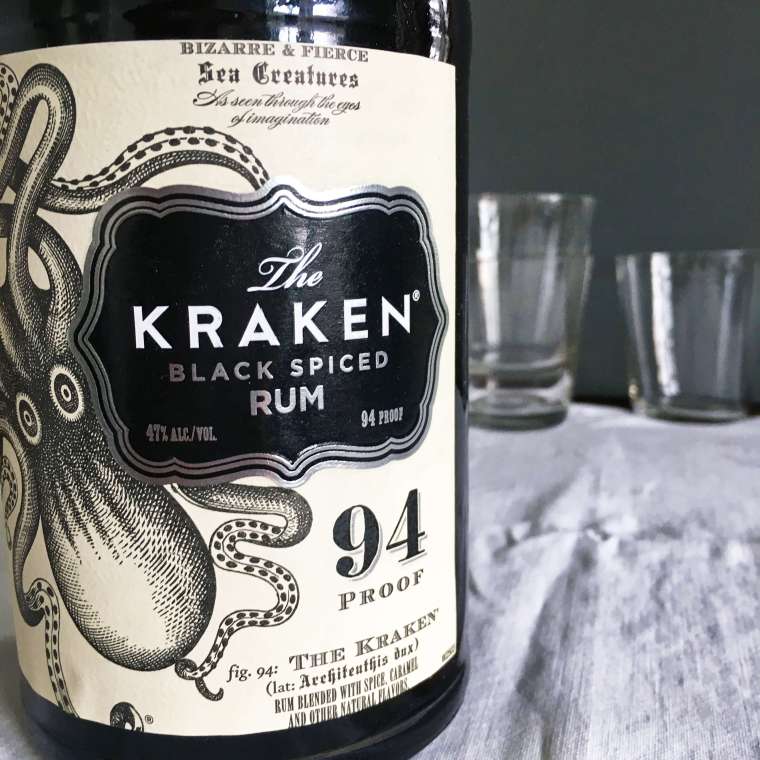 Taking only 20 minutes to make, Rum Punch was quick to prepare but there were a few surprises when it came to this recipe. First and foremost, the darkness of the rum. I’m not a big rum connoisseur but perusing this section of the liqueur store yielded quite a range in rum colors from light to dark, as well as flavors  (everything from natural to banana to coconut) which in turn alters the end result of your cocktail. The recipe calls for three other fruit juices as companions – oranges, limes and pineapples plus a final flourish of sprinkled nutmeg, so that is something to keep in mind when selecting your personal preference in the rum department. 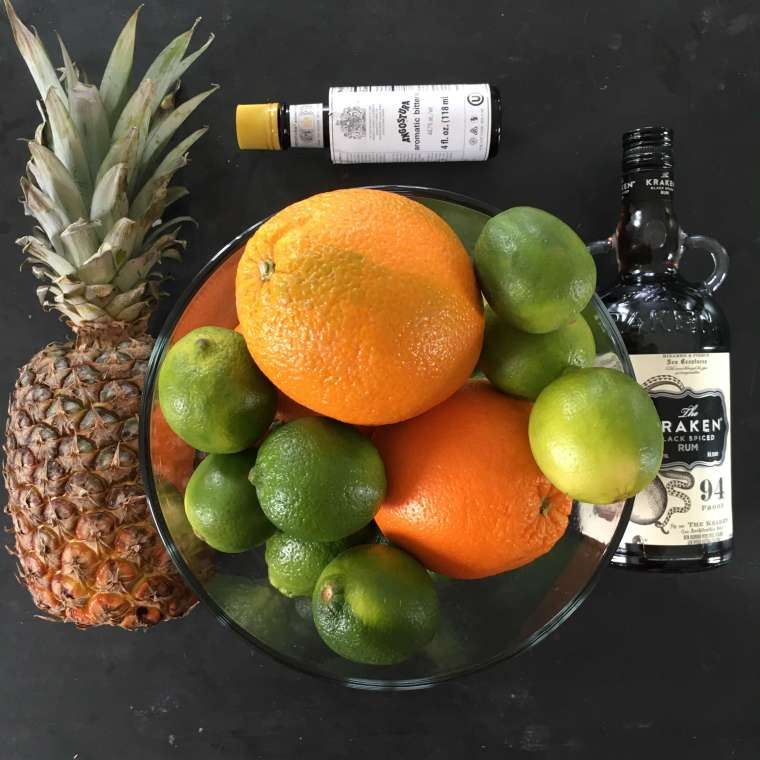 The second surprise was a difference in taste between room temperature punch and chilled punch. Vastly different! Room temperature punch tastes like all the sharp angles of everything… alcoholic, acidic, bitter and sweet.  But chilled punch (3 hours or more) is much more soft, subtle and well rounded. The chilling process gives this punch time to mellow and blend so that nothing jumps out significantly enough to say “oh this is full of lime”or “this is full of orange” or “this is full of rum” etc.  Instead you just notice that is full of flavor. Ideally, this is what you want in a mixed drink – a sharing of the spotlight when it comes to taste. And that’s exactly what this rum punch – Barbados style – delivers. It’s smooth, sweet and light without being syrupy, heavy and headachey.

I also loved the 1970’s color palette this drink produced… walnut, orange, lime green… it is definitely decade appropriate as far as aesthetic:)

Combine the lime juice, sugar, water (or orange/pineapple juices), rum and bitters in a lrge bowl.

Pour the mixture into a large pitcher and chill thoroughly. (Note: I strained the cocktail mixture before putting it in a pitcher since there was lots of lime pulp floating around the top from the freshly squeezed limes. I recommend chilling the mixture for 3+ hours in the fridge.) 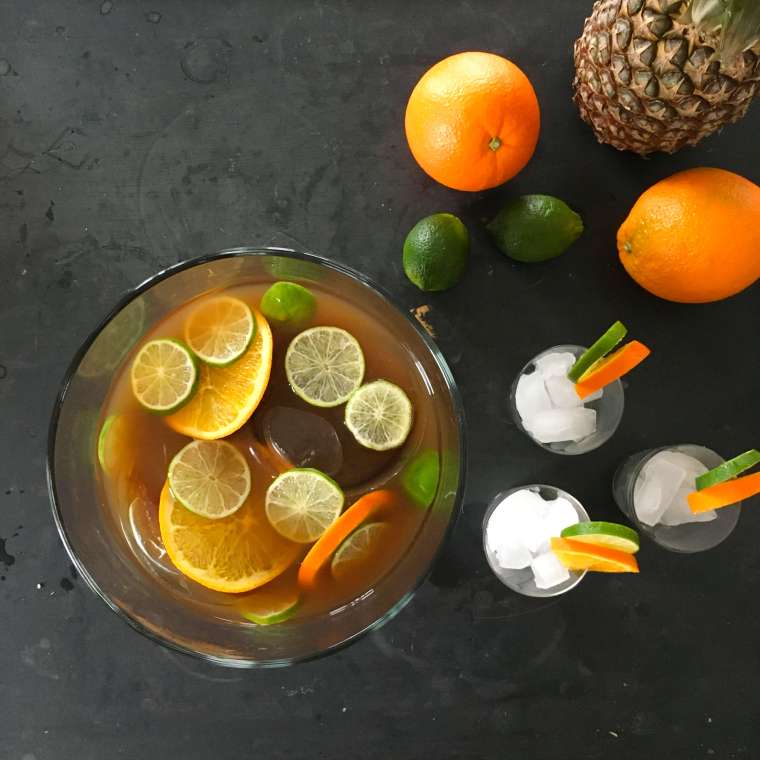 Serve in small tumblers, adding a touch of nutmeg to each drink. {Note: If you don’t have a large enough pitcher, which was my case, you can serve punch in a number of different vessels. This was a trifle dish, which works well because of the roomy basin and pedestal base. But you can also other kitchen items like a large bowl, a big vase or a trio of flip top glass water bottles.}

Garnish for both the bowl and the individual tumblers was made by thinly slicing limes and oranges.

The third interesting thing I learned while adventuring in the kitchen this week has nothing to do with the rum punch recipe itself but more to do with the country. Specifically with the music of Barbados. Tropical drinks, beach scenes and local music are a natural fit when it comes discussing island ambiance. Since each one compliments the other, i was excited to tie-in some local music with our local cocktail.  Originally, I thought Barbados would be flush with sounds of steel drums and tinkly piano music. But in actuality, the country’s music scene is rooted much more in tribal sounds from Africa, flute songs from England and narrative story telling.

Under British rule until the 1960’s, Barbados’ music scene grew out of tuk bands in the 1600’s – a combination of melodies and sounds which reflected African drums, English religious ballads, and Spanish arrangements. A distinct sound that was representative of all the cultures that inhabited “Little England” as Barbados was first called. By the 1920’s and 1930’s, a popular jazz and calypso culture distinguished Barbados from other Caribbean island music – sounds which still influence musicians and bands today.

One of the most popular artists ever to come from Barbados is Rhianna. But many decades before her, in the early years of the 20th century, there were highly lauded and famously recognized artists like Atilla the Hun (1892-1962), Lord Kitchener (1922-2000) and Lord Invader (1914-1961). They were responsible for popularizing the unique Caribbean beats that spread throughout the islands, including Barbados, and filling the airwaves with clap-your-hands drum beats and sing-songy storytelling. To highlight this interesting sound, I made a playlist on Spotify that features popular music of Barbados from the 1930’s – 2000’s to accompany this post.

The playlist opens with Lord Invader and his wistful song titled Barbados, which was produced in early in the 1950’s.  Traveling back and forth through the 19th century to include songs by Lord Invader’s comrades, popular favorites by Harry Belafonte and the Andrew Sisters, the list finishes out with a song from Krosfyah – a contemporary, modern day calypso band, so that you can see how the sounds of Barbados have evolved (yet still remained similar) over the course of a century.

There are 23 songs included in the playlist, some of which you’ve heard before and others which may be new to you.  Each of them are ideal companions to a cold glass of rum punch, day dreams of palm tree paradises, and impromptu dance lessons around your kitchen. One of the fun things about traveling internationally via the kitchen, is the ability to transport yourself to another place via food, and a festive atmosphere. The music of Barbados is bright and energetic and the rum punch jubilant. If the winter weather in your neck of the woods has you feeling cold and dreary, hope this post brightens your day!

Cheers to middle of the week celebrations, rum drinks that you make dance and music that makes you sing out loud:) Join us next week as we head out into week five of the International Vintage Recipe Tour. Our next stop takes us back to Europe where we explore a recipe that revolves around cheese and communal dining, something that was all the rage in the 1960’s. See you next Wednesday in…