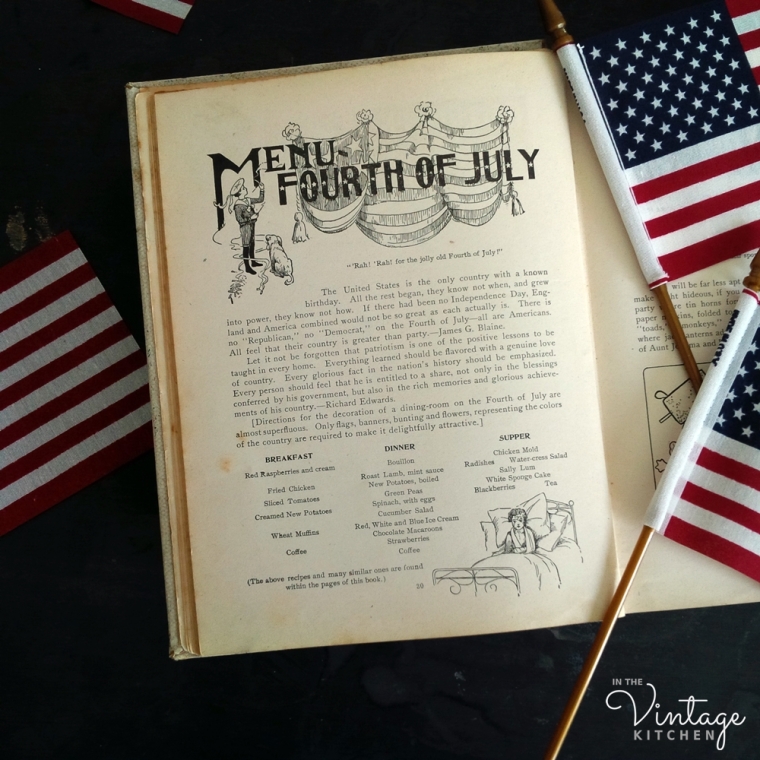 Happy 4th of July! It has been super quiet around here on the blog since mid-May and I must say, I have missed you all terribly.  There was a family tragedy and a family illness that took me unexpectedly far away from the Vintage Kitchen for most of June. But I’m happy to write that I’m back and ready to dive into a plethora of new kitchen stories starting this week.

Exciting things coming up in July include an interview with a creative artist who will make you look at your refrigerator in an absolutely new and enchanting way; we will travel back in time to a hotel in 20th century Minnesota and share a few recipes that made them famous around the world; we’ll learn about a guy who invented one of the most addictive foods ever known to eaters; we’ll celebrate three national food recognition days and we’ll host a giveaway that is guaranteed to add a little sparkle to your life. So stay tuned on that front. July is full of fun!

In the meantime, since it’s a holiday today and you are out and about celebrating with friends and family, we’ll keep this post short – a litle dollap of history pertaining to patriotism and how Americans ate their way through Independence Day in 1902.

In that year, this guy was president…

Decorations were simple…bunting, flags, flowers and the natural settings of the great outdoors. There were parades and town concerts and special events planned throughout the day.

Conversations were full of pride, in the general achievements of the country. Unlike today, where the political terrain is quite rocky and American morale is at an all-time low, in 1902, patriotism was a bit more revered. President Roosevelt prepared a speech saying nothing but thank you to the American military for continuing to extend and uphold the open arm ideals of the United States and pledged to continue to promote peace and tolerance throughout the world.

In American households during the early 20th century, the 4th of July was the one day where political affiliations were set aside. What was celebrated in conversation was not that someone was a Democrat or a Republican but instead an American. And topics led more towards incredible examples of what had been achieved in the past as a unified country as opposed to criticisms about the work that still needed to be accomplished individually.

Eating occurred on a large all-day scale with a full breakfast, lunch and dinner… each incorporating the colors of the American flag. Here’s a suggested menu from Woman’s Favorite Cook Book published in 1902…

You’ll notice, even back then, the holiday has always been about cooking and spending time together. The kitchen would have been a hotbed of activity (just like it still is today) preparing all the staples we still enjoy eating on the Fourth – ice cream, salads, garden vegetables, fresh berries, cake. Our national pride might be much more diluted now than it was 116 years ago but our bellies are traditionally still enjoying the same types of food. That is a comfort at least.

Teddy would have appreciated all the new voices coming forth this year (no pun intended!) in our fights for democracy and fairness and freedom for every person in America. He would have admired all the political bravery that exists today and marveled at all that we have accomplished so far.  Americans of the early 20th century would have lauded our collective efforts too, noting how far we have come on the food scene as far as innovations and improvements and equipment while still managing to keep the culinary traditions of our ancestors alive.

So it is with that in mind that we say cheers to the holiday, to the progress we have made, and to the traditions we still hold dear. However you choose to celebrate the 4th of July – whether you are partying it up at a fish fry, a barbeque, a picnic, a seafood boil or a campfire roast – I hope your holiday is filled with fun, family, and friends. May it be peaceful and light. And may all those fireworks be bright. Cheers to a happy holiday! We’ll see you back in the Kitchen shortly.

“Perfect cookery, immaculate surroundings and dainty service, each stamped with the hallmark of the individual hostess, exemplify the ideal to be fought for by the hostess of the new century.” That’s what food writer Janet McKenzie Hill wrote in 1923. 🌸 A lot has changed in how we entertain friends and family over the past 100 years but the one thing that still sticks strongly today is individuality. It’s been a guiding light in the kitchen on all fronts from choice of dishware to paint colors, equipment purchases to cookbook collecting. Even apron style. 💜 One of the most fun things about collecting vintage aprons is their most often 100% one of a kind design. This one features the softest, sheerest fabric and the deepest, darkest purple ricrac. A true individual for sure, it’s not only a dynamic combination of colors and fabric but also a subtle storyteller of a past party-giver’s kitchen aspirations. #aprons