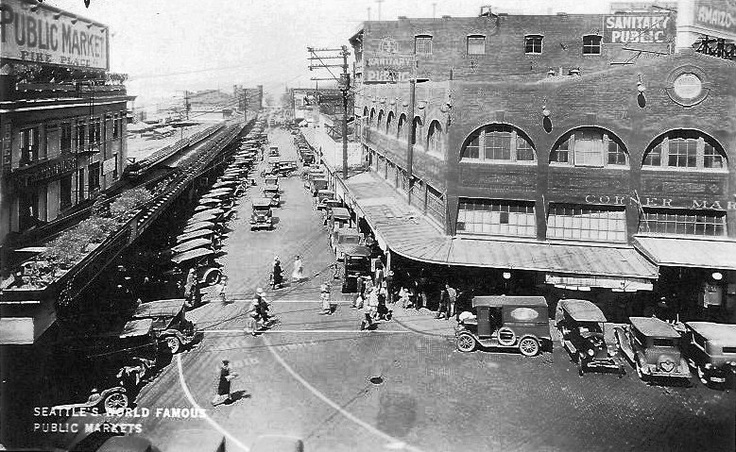 Somewhere between the 1920’s and the 1930’s my great-grandmother Mabel had a doughnut shop in Seattle’s Pike Place Market. This has been family lore for generations but like other interesting tidbits that lurk around the ancestry closet… a New York City Rockette, an indentured servant, a lost family fortune… there isn’t a lot of information or validation to support this entrepreneurial endeavor. But in a couple of weeks I hope to change all that.

Mabel grew up in Iowa, the youngest child of an 11 member family.  She trained to be a teacher in the rural country schools surrounding her hometown…

But once she met and eventually married William Earle she gave up the teaching profession all together.

Earle, as she called him, was a salesman for the National Biscuit Company but he suffered from some sort of health issue that was bothered by the heat of the Iowa summers. So a few years following the birth of their only child, Phillip, they packed up and headed west in a 1917 Model T Ford towards the cool climate of Seattle.

This was 1922 and my grandfather Phillip remembers sitting in the back of the Model T on top of bed rolls and tents, squished between pots and pans and spare tires. It took them 8 weeks to get to Seattle where they eventually settled into the Capitol Hill neighborhood overlooking downtown.

Earle, went to work as a foreman at a biscuit cookie factory.  Presumably this would be the time period that Mabel also went to work – in her doughnut shop in the bustling big city market. By 1940 Mabel and Earle would say goodbye to the city sweet treat businesses of factory and farm market to take on country life once again in a move out to the far suburbs to pursue dairy farming. That put an end to the doughnuts at least in the professional sense.

Mabel was a very creative lady – a clever writer, a sketch artist and a baker. We have a few of her recipes in the family cookbooks but no mention of any prized doughnuts and no mention of any experiences running a business at Pike Place Market, which makes for an interesting little mystery.

What must have it been like to be a  female entrepreneur in the early decades of the 20th century? Especially as a newcomer in a much bigger, more metropolitan city and with no professional experience to bolster her confidence? How did a country school teacher become a city doughnut maker? What made her start and ultimately what made her stop? Did she do it by herself or have a partner? How big was her space? What did it look like? What were her hours and how many doughnuts did she make in a day? And maybe most importantly, why doughnuts?!

Pike Place Market first opened in 1907 and quickly became a cross-cultural beehive of people and products offering everything from fresh fish to flowers, art to textiles and practically everything inbetween.  You can feel the excitement in this 1914 ad from the Seattle Star as the market gained momentum…

By the 1930’s, when Mabel was making doughnuts, the market was bursting and bustling with success and sales. There was a sizzle in the air of possibility and potential that must have felt catching and all-consuming. When I head out to Seattle in the middle of June I hope to answer all the questions raised about Mabel and her doughnut endeavor. I hope to be able to walk in her shoes for a time and learn more about what must have been one of the most interesting and intriguing periods of her life. Perhaps a doughnut recipe or two will even be discovered!

Stay tuned for more on this front as I report directly from the Market mid-month. In the meantime, cheers to mysterious Mabel and her doughnuts. Happy National Doughnut Day!

The trumpeter swan! Longtime symbols of love and devotion, this vintage handmade decoy is king of time, talent and the table centerpiece:) Read more about him in the shop 🦢