Once upon a time in history long, long ago there was a cake that fed the whole entire town on Election Day. Called simply, Election Cake, it was an active participant in the voting scene of early America. But while the recipe’s origins are as old as the United States itself, the exact history is a little bit varied depending on which source in which state is telling the tale.

Essentially though, everyone pretty much agrees that it boils down to the early days of New England (some say Connecticut, some say Massachusetts) when Election Day was celebrated in the Spring and considered one of the biggest party days of the year. Enjoyed with the same amount of zeal as our modern St. Patrick’s Day festivities, Election Day in 1700’s America was a boozy holiday full of ale and camaraderie and community support. Only people weren’t celebrating one particular heritage like we do the Irish on St. Patrick’s Day. They were celebrating everyone’s heritage, as Americans, on Election Day. The fervor was for freedom. And the cake was needed to sop up everyone’s spirits (the ale especially).  It also provided a little motivation to actively vote for the political candidates of the day, because even in 1700’s America, people (and politicians!) were aware of the powerfully compelling nature of cake and its ability’s to attract favor.

Being such a big festivity in the lives of Colonial America, with people traveling from miles around to attend special gatherings,  it made sense to local residents, at the time, to bake one enormous cake to serve all who showed up. So out of thirty quarts of flour and fourteen pounds of sugar and ten pounds of butter, Election Cake was born from the loving hands and hearts of local women who couldn’t vote themselves but could at the very least feed the men who were voting for them. Some historians say that this proves that women were important members of the political spectrum even back then when they had no vocal authority.  I don’t know about that, they may have just looked at the voting day in a practical feed-the-masses way,  but it is fun to think that while they were baking, they were also discussing political topics among themselves. Even if they were just hushed whispers while they were mixing batter and melting butter, I like to think they were formulating their own ideas about what should and could happen in the future shaping of America.

The interesting thing about Election Cake though is that it is not really cake. Since its inception it has really been more of a fruit and spice studded bread than a traditional cake. And in true American spirit it has been revised and enhanced and reworked over the centuries into numerous different versions like breakfast buns, frosted bundt cakes and drunken fruit cakes. The core of the recipe remains the same though – flour, butter and sugar – but over the years different variations have been included and excluded that involve milk, eggs, raisins, currents, citrus fruits, whiskey, rum, brandy, wine, confectioner’s sugar, etc. Baking equipment differs too. Originally, back in the day when one giant cake was made, it was too big to fit into any bakeware so it just baked free-form on the oven floor. Next came bread loaf pans, a smart decision that produced numerous easy-to-handle loaves that could be made by numerous hands. Then there was the bundt cake method, the cast iron skillet method, the baking dish method, etc.

For this post, I’m making the Fannie Farmer version from her 1965 Fannie Farmer Cookbook, which was first published in 1898. True to form, this recipe has changed a bit over the Fannie Farmer years too. The 1960’s version involves raisins, whiskey and loaf pans. Her original recipe from 1898 called for figs, sour milk and bread dough starter.

A nine hour baking project from start to finish, this is a kitchen adventure that will unfold over two days and two blog posts. Tonight, we discussed the history behind the recipe, and tomorrow we’ll discuss the actual recipe and how it all turned out. Will it indeed be more like a raisin bread rather than a fruit cake, as it is listed in Fannie’s cookbook? Will our modern palettes fall in love with this old fashioned recipe enough to resurrect it and recommend it in the Vintage Kitchen?  Will it become a repeat labor of love on future days of election or will it be a one hit-not-so-wonderful? Only time will tell in this case. Tune in tomorrow for the 2018 Election Day results, vintage kitchen style…

Tucked in between Sunday and Wednesday, Congress chose the first Tuesday in November 1845 as the official day to declare this political event a national holiday. Ideal for voters who would have to make a day’s journey into the county seat to cast their vote (Monday) without disturbing the nation’s religious rest day (Sunday) or encroaching on merchant market day (Wednesday) Tuesday was the perfect day in the week to call upon the country to exercise it’s political powers.

In 2013, Ms. Jeannie’s mom sent a box of family treasures and interesting antiques that had been collected or used by various family members over a century ago. Contents included a civil war inkwell used by Ms. Jeannie’s great great grandfather Albert…

and a silk scarf monogramed for Ms. Jeannie’s great, great grandmother Martha at the World’s Fair in 1893…

Another fantastic wonder included in the box was this pair of campaign buttons for Republican presidential nomination William McKinley and his vice presidential choice Garret Hobart. 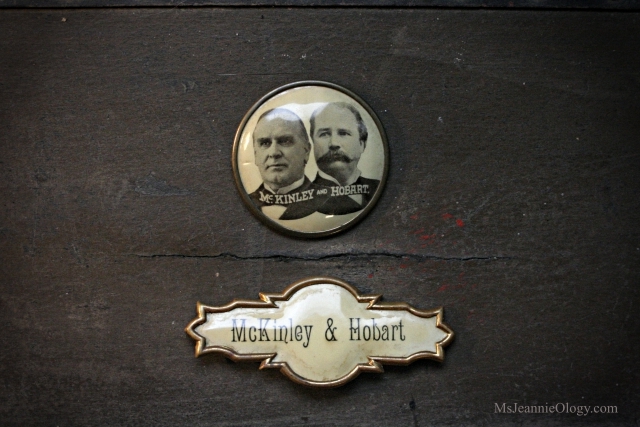 Dating to 1896, the set is comprised of a 2″ inch round button badge and a 3″ inch tie clip encased in gold medal. McKinley was running on the platform of maintaining the gold standard as the foundation for the U.S. economy so almost all of his political swag included gold colors to communicate his cause.

There were gold campaign posters… 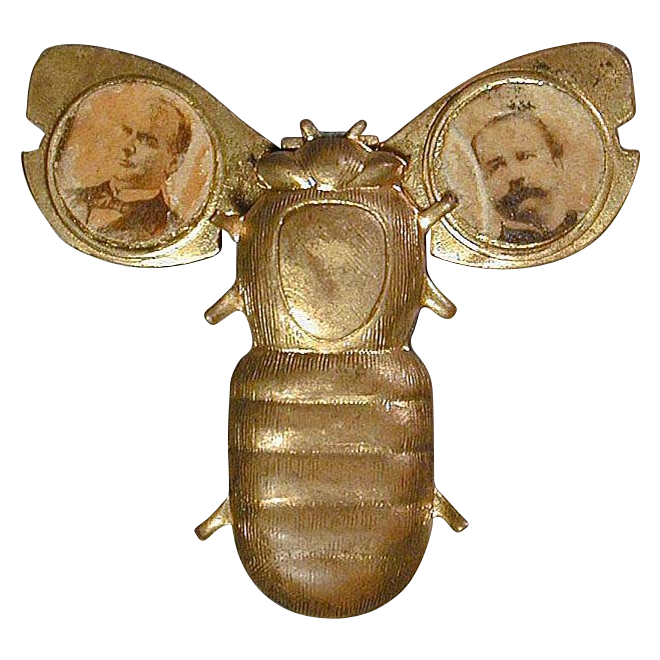 There were gold campaign ribbons…

a bevy of gold buttons some featuring the pair, some just featuring McKinley…

and even a gold umbrella for rainy day rallies!

Donald Trump and his love of all things gold would definitely have approved of the McKinley/ Hobart campaign colors!

McKinley’s platforms of protection, sound money and reciprocity turned out to be winning tickets as he defeated Democratic hopeful William Jennings Bryant to become the 25th President of the United States with Garret Hobart at his side.

Get lost for just a minute in the patriotic spirit of the day with this footage from the National Archives as you take a walk along the parade route with spectators at McKinley’s inauguration in March 1897.

Striving for hope, opportunity and prosperity for citizens of the United States, McKinley barreled through his first two years as President before tragedy struck the White House in 1899 with the death of Hobart from a heart condition. McKinley, carrying on, campaigned and won a second term in office in 1901, this time with Theodore Roosevelt as his VP. But by 1901, McKinley himself would be dead – the third US President to be assassinated.

It is easy to get caught up in the hoopla of contemporary political campaigning and to forget the hundreds of campaigns that came before. In 1896 these two gentlemen, McKinley and Hobart  were the dream team of the Republican party – riding high on their hopes and ideals for a better country and more golden skies ahead. Not much has changed in that department over the course of a century and half. Politicians still seek the same things – a better way of life for all. We are lucky in that way. To  live in a country where we have the freedom to express our views, the encouragement to strive towards our dreams,  and the support to accomplish our goals not only as individuals but also as Americans.