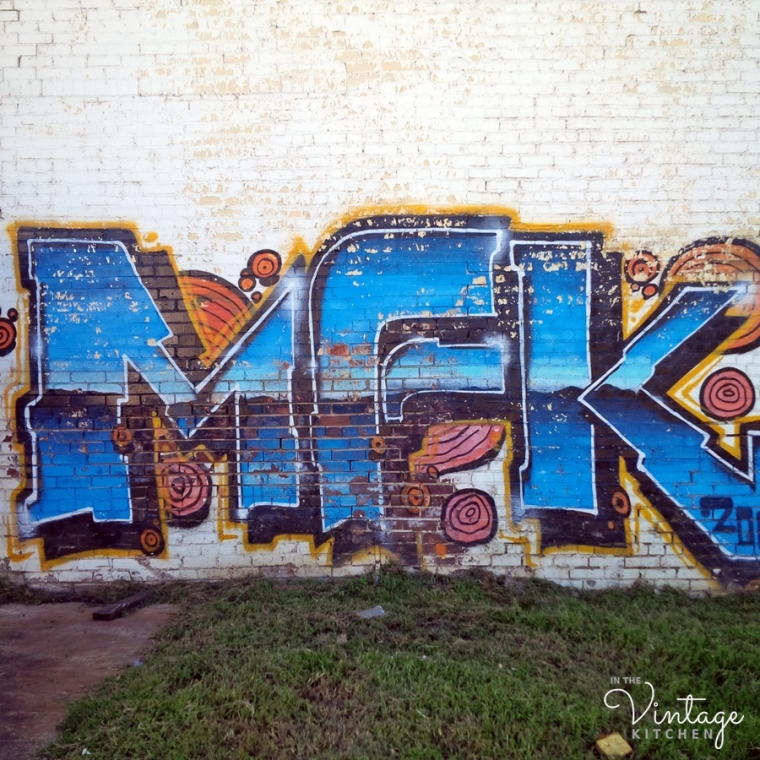 There is a group of graffiti artists in our city called the Metal Fingers Krew. They make these spectacular giant wall murals of their initials all over town on the sides of industrial buildings. Every time I pass one I think of the food writer MFK Fisher who shared the same initials.

The work of the Metal Fingers Krew is elaborately designed and really beautiful. They make their mark mostly on warehouses that are nondescript or in a state of shabbiness, so they add a bit of pizazz to the landscape with their color and their big 4-5 foot tall font faces.

MFK Fisher (1908-1992) made her mark on the 20th-century literary scene writing about food and how it looks and tastes and feels over the course of 30 books. Considered one of the most beautiful prose writers still to this day, she wrote her way through her own experiences… of men and marriages, of cross-continent moves, of motherhood and memories and of making food to eat. 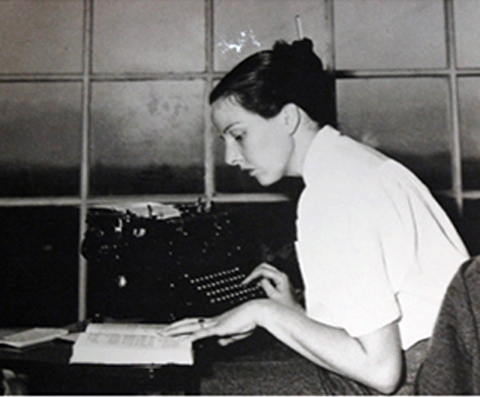 The Metal Fingers Krew works like traditional graffiti artists – under the cover of night. One day you pass a blank brick building and the next day it is magically decorated. In a city that has a lot of murals but not a lot of graffiti, street art really stands out. The thing I notice most is not that this talented batch of artists defaced a building (which may or may not be exciting to the property owner) but that they’ve added a layer of creative flourish to what is otherwise a very linear and industrial part of town.

MFK Fisher also added her own flourish. Writing about food and life with such poetic, descriptive detail you can practically taste her words, she was famous for saying that she just wrote the facts of things.  But in doing so she also wrote the feelings of everything. Even the unglamorous sides of cooking… the dirt, the dishes, the heat, the nonsense, the dueling perspectives, the disasters.  Like when you are canning fruit in the summertime without air conditioning you get hot and sweaty. Or like when you pull butter and lettuce out of water from the spring house storage you get cold and shivery. That was all just part of the process of eating and experiencing, not an indelicate act or sensation that should go overlooked or unnoted because it was unattractive to talk about. Every bit was important.

The Metal Fingers Krew talks the same language in their own way too. They point your gaze at a typically unattractive building and make you look at the detailed beauty of it simply by adding a swatch of color. They call attention to the plain-Janes of a shed row, or the slow decay of a factory, or the burnout of a building left vacant in the same way that MFK Fisher draws attention to eating the everyday foods that we mostly take for granted.

I think MFK Fisher would have loved the passion behind the Metal Fingers Krew graffiti art just as much she liked describing her passion with food. They were two artists working in two different mediums but had the same initials and the same sole purpose of expressing oneself.

“One of the pleasantest of all emotions is to know that I, I with my brain and my hands, have nourished my beloved few, that I have concocted a stew or a story, a rarity or a plain dish, to sustain them truly against the hungers of the world.”  MFK Fisher

What do you think? Do you see other stories or other artists in the face of graffiti? If so, please share your comments below!

In the meantime, cheers to painters and food preparers and the perspectives they bring!

There’s a real love affair going on in the front yard between the Rose of Sharon and the sugar maple. We aren’t sure who is trying to impress who the most but they are definitely showing off their brightest colors for each other. Summer loves Fall. Rose loves Sugar. And that’s all there is to say about that. 💜 🧡 (p.s. stop by our stories today to see the sugar maple in all its golden shades.)