Hello and welcome to Week Two of the International Vintage Recipe Tour 2020! This week’s cooking adventure takes us 7,200 miles away from the lamb-stuffed food of Armenia to the beautiful land of Australia, the only stop on our Recipe Tour this year, that is both a country and a continent.

As you all know, Australia has been in the news quite a bit these days due to the devastating wildfires burning throughout the country. In an effort to help the recovery process and because this is our featured destination of the week, 50% of all Vintage Kitchen shop sales made between January 15th-January 22nd will be donated to the Kangaroo Island Wildlife Park. There people are working tirelessly to save the koalas, kangaroos and other wildlife harmed by the fires that burnt a large portion of their natural habitat. This donation will help feed, shelter and supply the island’s animals with much-needed medical care and attention. I selected Kangaroo Island Wildlife Park because they specifically addressed through social media, the need for food supplies for the animals, all of whom are national icons and unique treasures of the country.  If you wish to donate to Kangaroo Island Wildlife Park directly, please visit their donation page here.

Because we are visiting countries alphabetically via the kitchen on this Recipe Tour, (a decision made last summer when the whole international idea first came about), it just so happened that we landed on Australia during an environmental crisis.  At times like this, when an area of the world is going through a major upset, it seems trivial and unnecessarily indulgent to draw attention to something like dessert.

But one thing I learned after experiencing 9/11 while living in New York City, is the significance of small pleasures. Familiar experiences like watching a favorite tv show or listening to music or eating a favorite food during a time of disaster can bring a much-needed sense of comfort and temporary joy. Even if it’s just a mild distraction in a day full of struggle. Our featured recipe this week is a homemade cake. Usually cake is most defined as a celebratory food – one that draws people together, raises spirits and commemorates life, new beginnings or accomplishments. It is one of the most optimistic and joyful foods we eat. One of the few that can automatically bring people together and instantly raise spirits. So it is with that in mind, that I focus this post. For the days and weeks and months ahead for Australia, I wish endless amounts of cake and all the symbolism that such a sweet treat stands for… love, support, community, optimism and comfort.

In this week’s post, we’ll be making an Australian favorite – Queen Mother’s Cake, a flourless chocolate cake that reflects a cosmopolitan cross-cultural heritage. We’ll also learn more about the vivacious English woman behind the recipe’s name, including her special connection to the Land Down Under. 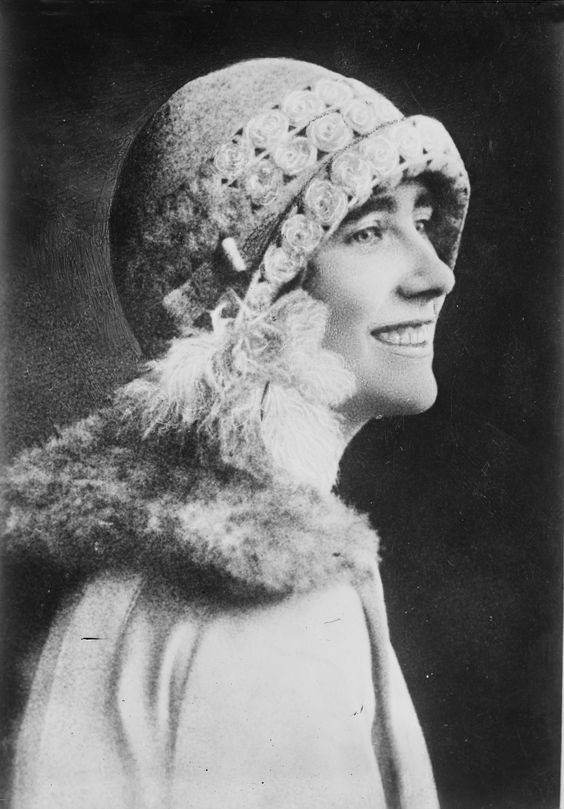 Do you recognize her? Long before Kate Middleton and Meghan Markle captured headlines, this famous royal woman dazzled the world with her vivacious spirit and warm personality. If you guessed that she was a lady, a duchess or a queen you’d be right on all three fronts. She is Lady Elizabeth Bowes Lyon, also known as the Duchess of York, Queen Elizabeth and the Queen Mother. If you were intimately involved with the royals during her lifetime, you’d know her by one more moniker too – her family nickname “Cake” which was earned because of her sheer delight and interest in anything resembling a cake-like dessert. This was Elizabeth on her wedding day, the start of her journey towards eventually becoming Queen Mother…

and this was her elaborate wedding cake…

but in real life, for much of her life, Elizabeth the Queen Mother, was the star of her own spectacular show. A glittering jewel in the Royal Family, she was beloved for her warm demeanor, her cheerful personality and her ability to relate to people, most especially working-class women. 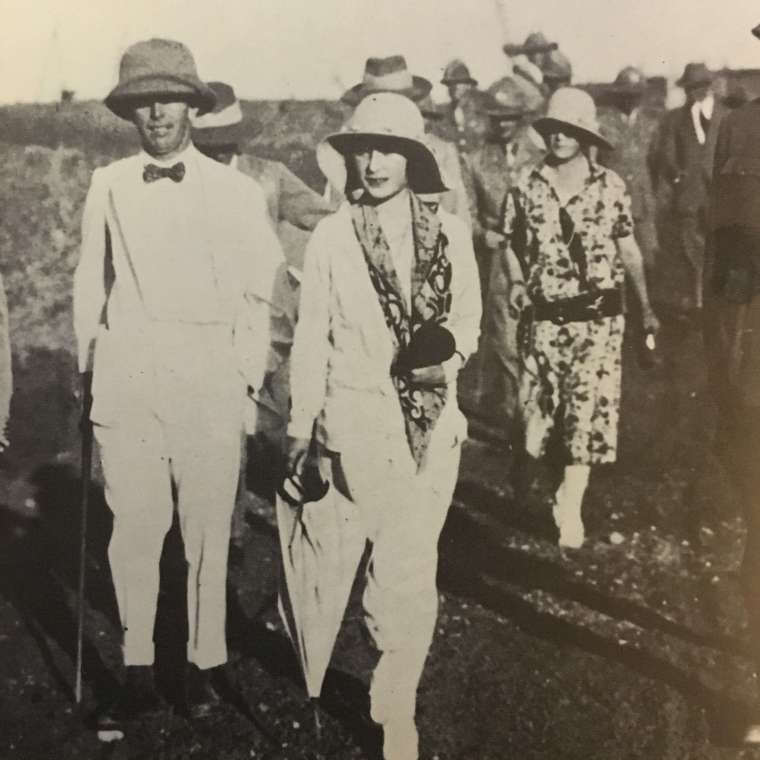 A world traveler throughout her life, she loved trying new things and surprising people with her authenticity, integrity, capability and willingness to be involved. If she went camping, she would set up her own tent. If she went fishing, she would catch her own dinner. If she wanted a new dress, she’d work out the initial designs herself. Witty, stylish, observational and fun to be around, Elizabeth was one of the most popular members of the Royal family from the time she stepped into the limelight as the bride of King George VI to the time of her death at the age of 101.

She visited Australia several times throughout her life, but her first impression of it in the 1920’s sealed her fondness for it for the rest of her life. In a letter home to her mother, in 1927 she wrote…

“It is most lovely country… The climate is marvellous – very hot sun and cool breezes, and we have both enjoyed ourselves up here in Queensland. The people are so nice & friendly, & the distances are so vast that it keeps them simple.”

As the previous constitutional monarch of Australia (up until 1952), it’s easy to understand how Queen Mother’s Cake could be linked to Aussie history. But the origin story of this confectionary creation doesn’t start or stop there. Legend states that the cake was introduced to the Queen via a Polish pianist named Jan Smeterlin (1892-1967)… 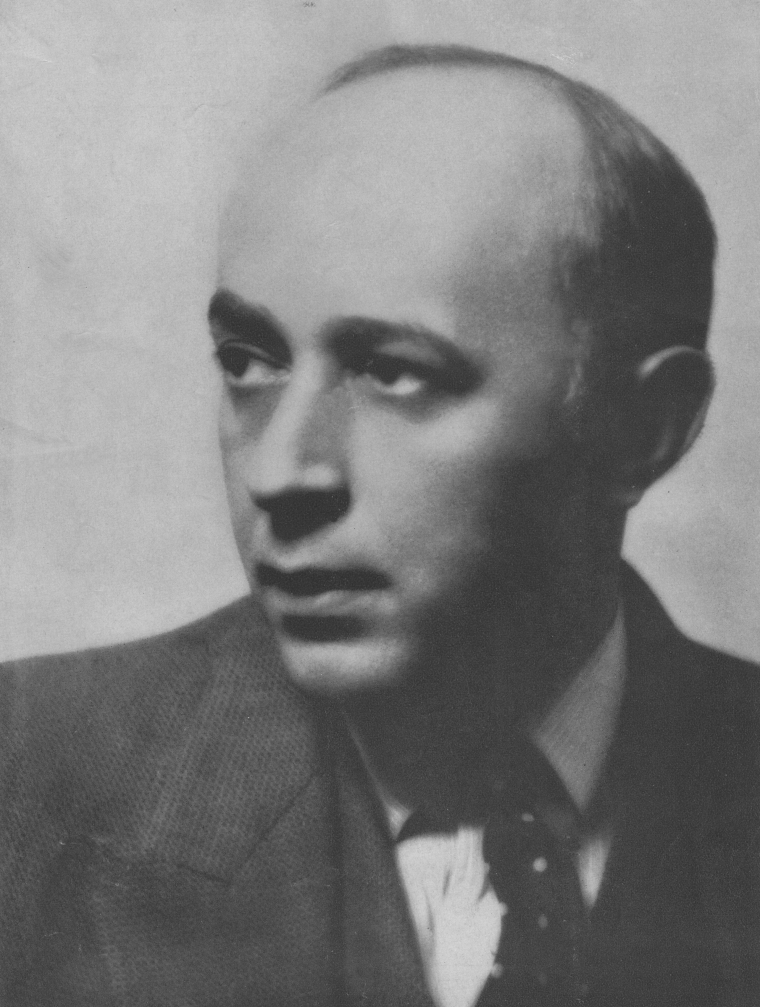 who had first tasted the cake in Austria. Jan, in addition to being a talented piano player, was also a talented cook. It is unclear whether he brought the Austrian recipe home with him or if he created it from memory in his own kitchen, but either way , the story goes that he made the cake for the Queen one day while she was visiting him in the early 1950’s.  So in love with it did she fall that Queen Elizabeth requested a copy of the recipe from Jan and started baking it herself at the palace. Taking on new significance and a new name – Queen Mother’s Cake – it became the favorite cake that Elizabeth liked to offer to guests and it was the only cake that she insisted on making herself each time an occasion called for it.

With its glossy chocolate frosting, simple ingredients and fluffy, moist consistency, it is easy to see why this cake became a favorite, not only with the Queen and Jan Smeterlin, but also with all of England and Australia too.

So delicious, so easy to make and so fast to assemble, Queen Mother’s Cake tastes like a fudge frosted brownie but without the heft and density normally associated with a traditional flour-filled brownie. A dash of powdered instant coffee in the frosting gives a slight tangy contrast to the sweet cake and a dollop of freshly whipped cream perfectly unites all the flavors. 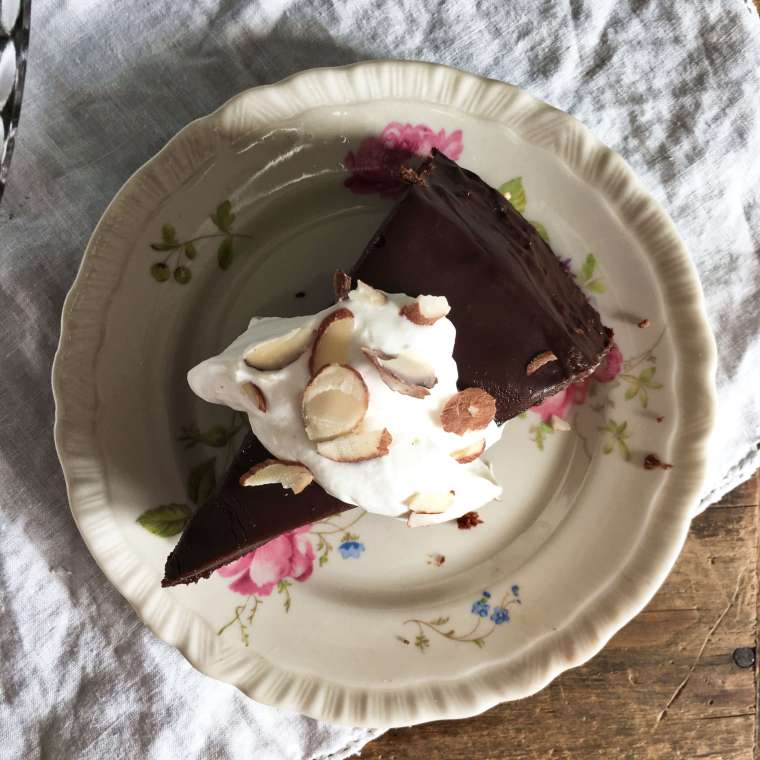 I’m always a fan of a cake that allows you a little creativity in the decorating department. Apparently many Australian bakers from earlier generations learned their pastry and confectionery skills from English artisans during the Victorian era which focused heavily on beautifully presented cakes and exquisite designs.  This stylized influence and interest in gorgeously crafted cakes has remained within the country over the past century, making Australians some of the most highly skilled cake decorators in the world.

The Queen Mother’s Cake is sort of a blank canvas of creativity though when it comes to the presentation department. Like the woman it was named after it is very amenable and open to all sorts of different design interpretations and embellishments.  This recipe just calls for a simple, smoothly frosted cake with no particular adornment though. In wanting to stay authentic to the recipe, I left my cake unadorned as well, but I couldn’t help adding some whip cream and a sprinkle of sliced almonds on each slice. There is something to be said about a good simple cake that requires minimal effort, but next time, it might be fun to experiment with a little extra design on top too. 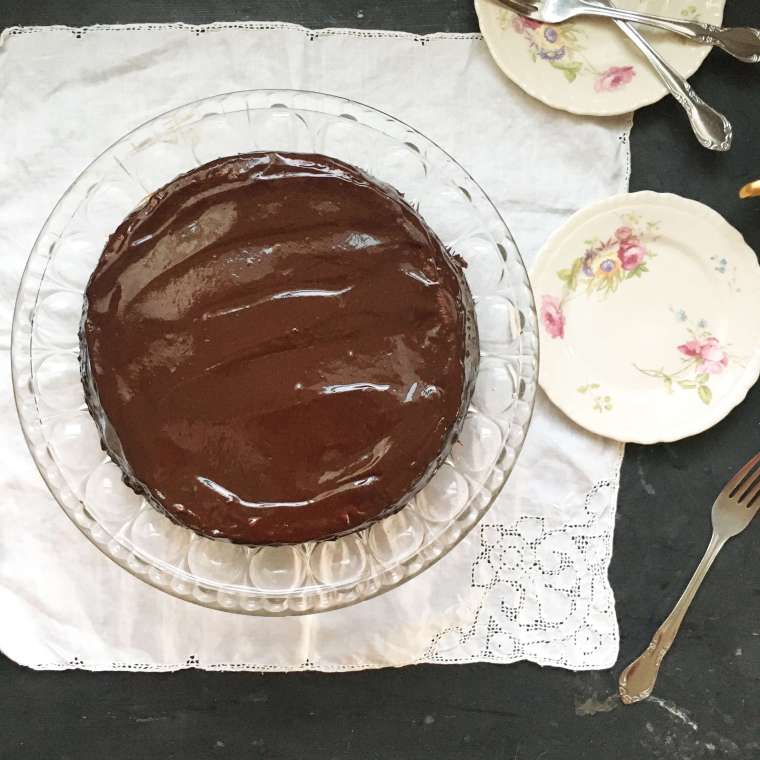 Butter a 9″ inch spring-form pan. Line the butter with waxed paper (parchment paper) and butter the paper. Dust the sides and bottom with fine bread crumbs. Set aside.

Melt the chocolate in the top of a double-boiler. Remove the heat and cool. 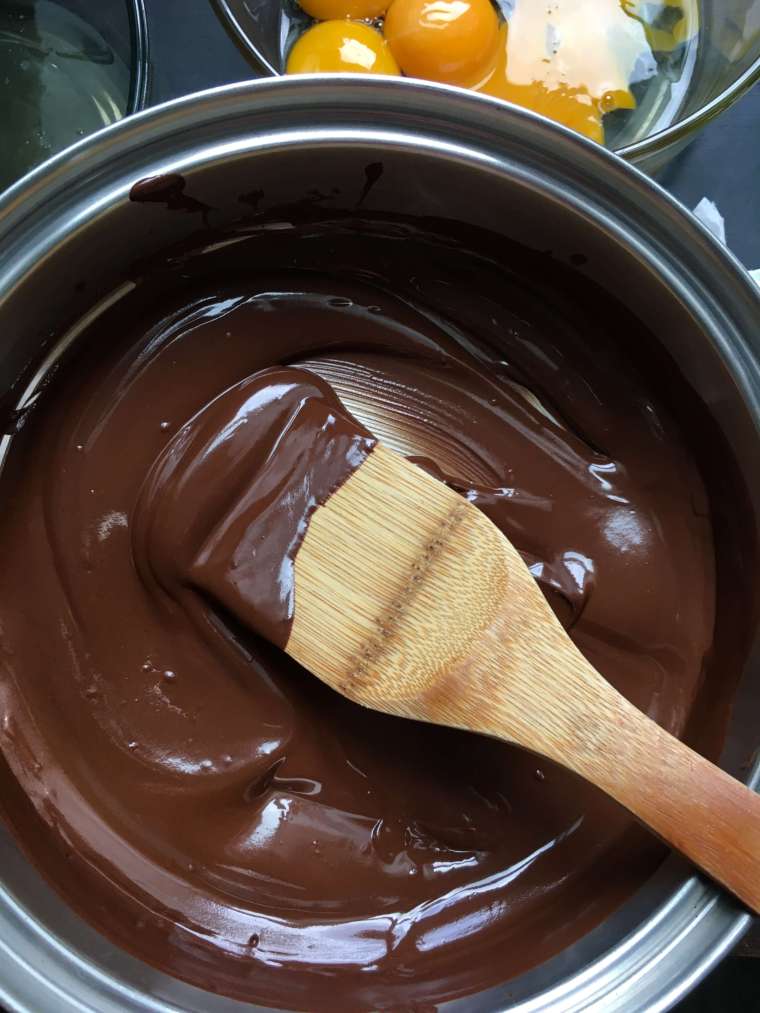 Cream the butter and sugar very well. Add the egg yolks one at a time, and beat until smooth. Stir in the cooled chocolate and almonds. 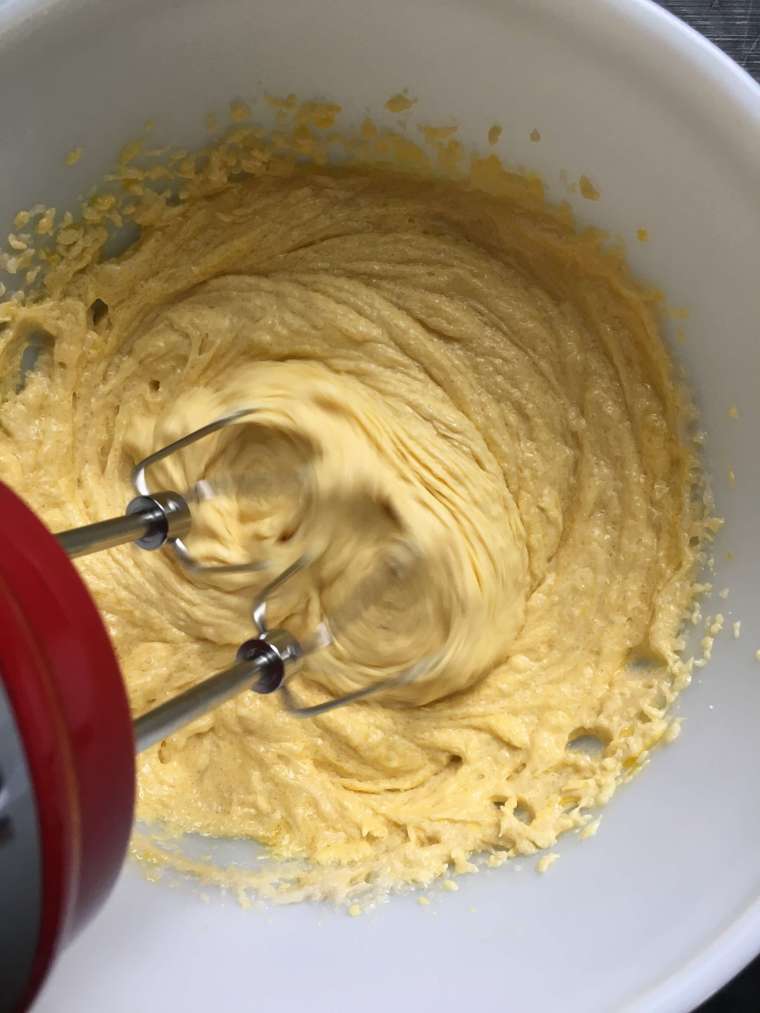 Beat the egg whites with the salt until stiff but not dry. Adding one-third of the egg-whites at a time, fold carefully into the chocolate mixture. 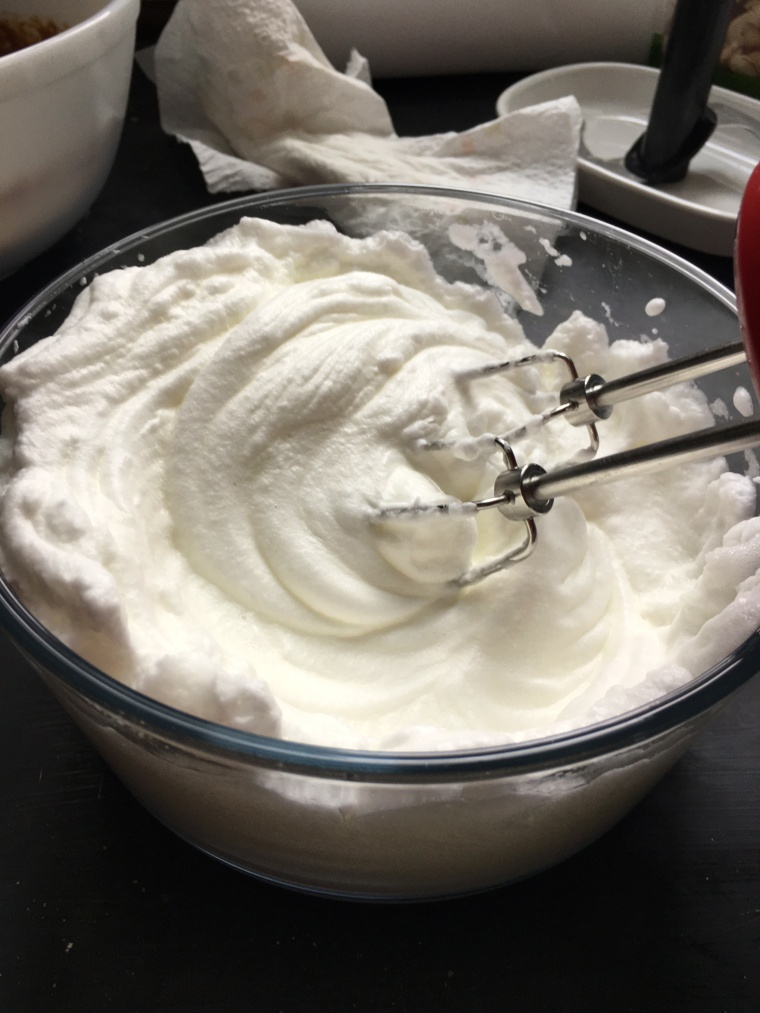 Pour into the prepared pan… 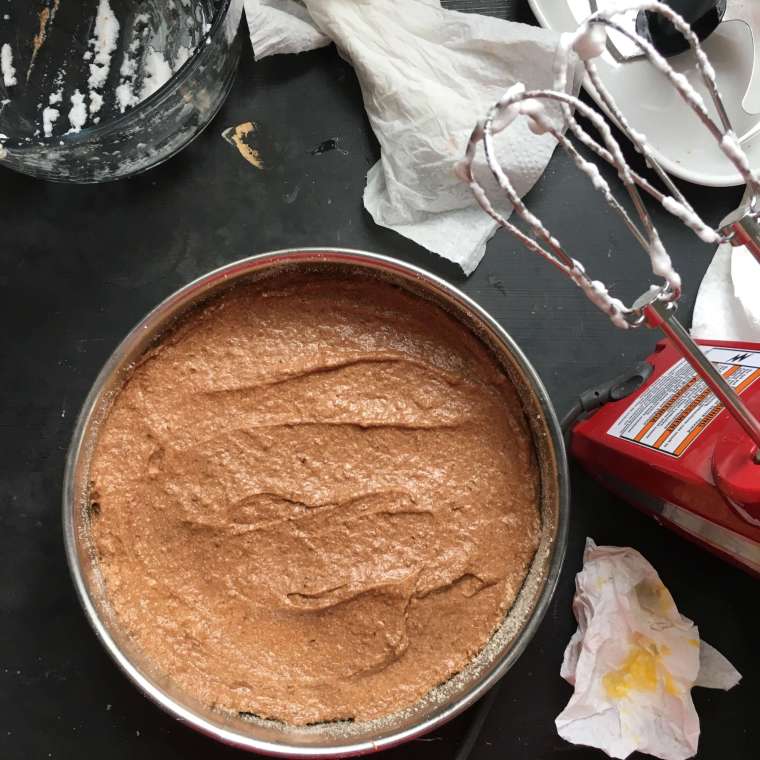 and bake twenty minutes. Reduce the oven temperature to 350 degrees and bake 45 minutes longer . Remove from the oven, place on a wet towel, and cool.

When cool, remove the cake from the pan. If the top is uneven, level it with a thin sharp knife. Place the cake on waxed paper (or parchment)…

Next make the icing. Heat the cream in a heavy saucepan until it just barely begins to boil. Add the instant coffee and stir to dissolve…

then add the chocolate. After a minute or two, remove the saucepan from the heat and stir constantly until the chocolate is completely melted.

Let cool a few minutes until just barely tepid. Poor icing over the top of cake.  Using a spatula, completely cover the top and sides. 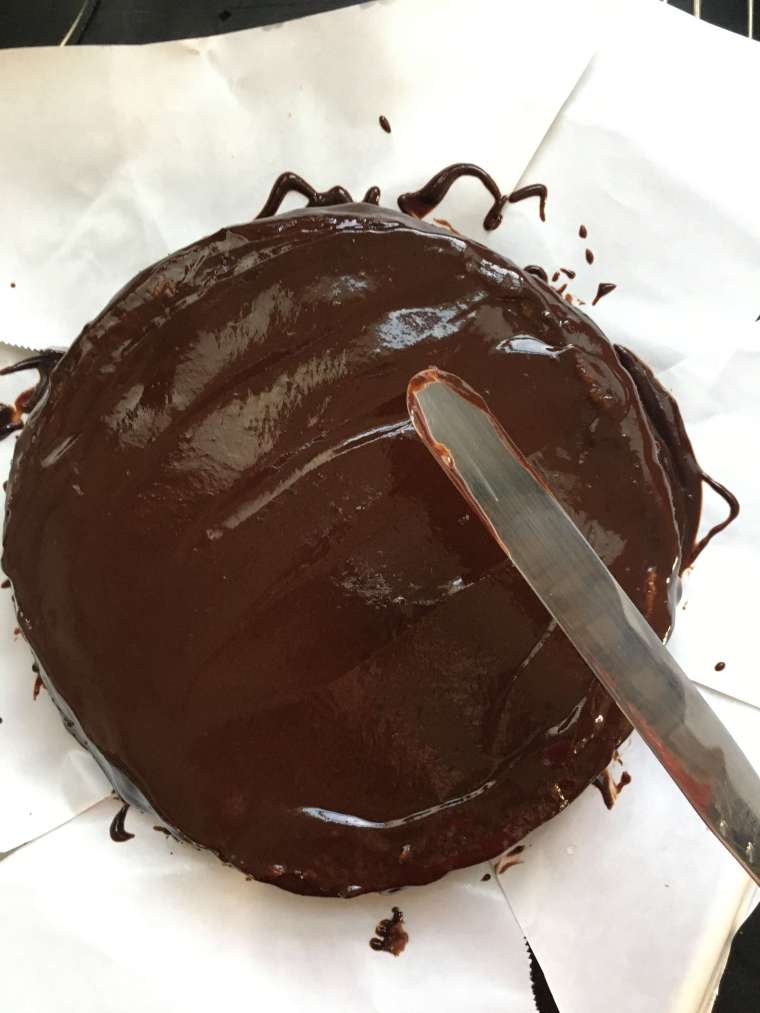 Let stand at room temperature until the icing sets, then transfer to a cake platter. Gather up all your friends and your family, your co-workers, your neighbors, your party-goers, your joy-seekers. Then, get to celebrating. Raise a fork to Australia and to all that they have managed to achieve in the face of adversity. Raise a fork to optimism and to courage, to comfort and support. To cake. And to carrying on towards a brighter day.

Join us next Wednesday, Week Three of the International Vintage Recipe Tour 2020, as we head out on our next epicurean adventure… Austria, where we will be making a saucy recipe and discussing all things food and travel with a modern-day local. Stay tuned!

22 thoughts on “A Celebration for Australia: Queen Mother’s Cake & The Royal Lady Who Inspired It”